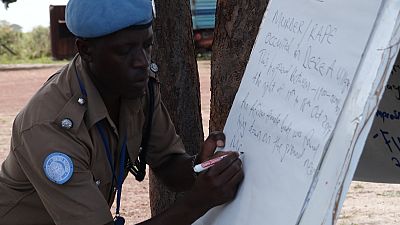 Police officer Sergeant Nyayup Dior Thor is passionate about investigating incidents of rape and sexual violence so that the perpetrators of violence against her fellow South Sudanese women are held accountable for their crimes.

Thousands of women and girls across the country have been subjected to sexual violence during the five-year conflict that has plagued South Sudan. But it hasn’t been easy for police officers like Sergeant Nyayup to do their jobs with police posts abandoned or destroyed during the war and a lack of basic resources.

To help build the capability of police officers, the United Nations Mission in South Sudan is running training sessions on the ethics of law, investigation and community policing in Bentiu.

The sessions are designed to assist with the operation of mobile courts, supported by UNMISS and the local judiciary, which have been hearing cases of serious crime, including rape, murder, robbery and assault. During a recent session, the court heard 17 cases, eight offenders were acquitted and nine were sentenced to prison.

Police officers in the area are eager to improve their skills to ensure that thorough investigations are carried out in advance of the next round of mobile court hearings.

“My unit recorded more than five cases of rape, but we failed to compile the necessary information due to a lack of skills,” said Sergeant Nyayup.

She is currently dealing with the case of a 14-year-old raped after refusing to participate in a forced marriage.

“I talked to the girl and she explained the situation, but it involved a very long chain of connection to people from her close family whom she would not mention clearly,” said Sergeant Nyayup. “So, I could not proceed because I didn’t know the type of the law that can defend the victims.”

She said the training offered by UNMISS’ human rights team, UN Police and Steward Woman, a local non-governmental organisation, had greatly improved her understanding of the law.

“My takeaway from these sessions is to enlighten my peers so that we can together combat these family-connected cases as well as retaliation resulting from early and forced marriage.”

His focus is on learning how to track criminal groups and to properly compile information obtained during the investigation.

“We recently arrested drug owners and cattle raiders so we need to know how to collect information and file it before the next sitting of the mobile court,” said Captain Juay. “We also now understand that no one is above the law and we need to trace the chain of information to include the founders of these criminals and armed gangs.”

UNMISS human rights officer James Tamba Turay said that the training would result in a significant improvement in the quality of the cases filed by the local police which is crucial to the success of the mobile courts.