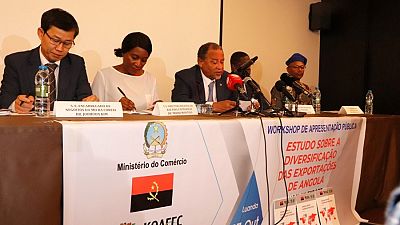 The Angolan Government has launched a study funded by the Bank through the KOAFEC trust fund to support the improvement of export diversification and the business environment.

“Export diversification will allow Angola to integrate into the regional markets under SADC and ECCAS and at continental level. With regional integration, countries such as Angola have the opportunity to buttress trade with its neighbours, hence realizing the structural transformation that is needed to step up to the global stage.”, Mupotola said. The Bank’s director also illustrated Angola’s strategic position to trade and benefit from countries such as landlocked Zambia.

The study proposes to prioritise the manufacturing, agriculture and tourism sectors for export action plans and government support, with six key products and services: beverages, travel and tourism services; glass/ glass bottles; cement; vegetables and fruit. The products were selected on the basis of their potential to generate employment, add more value, link to micro, small and medium sized businesses, as well as align with government priorities.

The study will serve as a basis for enhancing competitiveness in Angola and is expected to promote the country’s potential to contribute productively to regional and global value chains.

Press releases are also available on the Bank’s website at https://www.AfDB.org