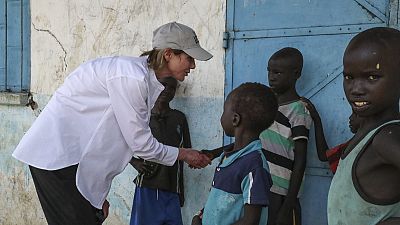 Regina Achai fled her home in Malakal five years ago along with thousands of other families when violence erupted across South Sudan during the civil war.

The 27-year-old has now returned to the area in the wake of a peace deal which has helped reduce political violence across the country.

Today, the town in the Upper Nile is bustling with activity. While 32,000 displaced people still live in a United Nations Protection of Civilians site, they now move freely between the camp, buying and selling goods in the local market while their children are also attending school.

“Other people like the Shilluk tribe have been in the POC (Protection of Civilians site) but you know, now, they are mixing it up with others,” said Regina Achai. “They are coming here to do some business, they are even speaking their language, while before it was prohibited. Now they are speaking freely, so there is peace.”

United States Ambassador to the United Nations, Kelly Craft, travelled to Malakal following a visit by a high-powered delegation from the UN Security Council which met with President Salva Kiir, Opposition leader Dr. Riek Machar and other signatories of the peace agreement.

She saw first-hand the improving security situation and spent time listening to the experiences of women living in the protection site.

“Their main message is that they just want for their families what we have, especially in education,” said Ambassador Kelly Craft. “That’s been an issue, especially with the women who have lost their husbands, the widows, their children – who they are calling orphans – they want them to have the same education as the families that are intact.”

The Ambassador also visited a World Vision waterpoint which is helping alleviate a severe shortage of clean drinking water.

“Right now, the rate of diarrhea has reduced in Malakal town, because this water is enough for all,” Malakal resident, Achol Nyboung told the Ambassador. “But with the increase of the population in Malakal town, you come in the morning, you find a lot of crowds and, also in the evening, from 4pm onward, there is a lot of people.”

When asked what more can be done to help Malakal residents, Regina Achai had a simple answer.

“I would ask for food and shelter and then I would tell them to put some water taps nearby because those who are living far away have to travel a long distance to fetch water at the river bank,” she said.

“For young girls, 14 to 16 years old, it is not safe for them. I cannot say the situation, or the security, is 100% there. So, leaving these children to go and fetch water at the end there could be something bad happen.”

Acknowledging the plight of the people, the Ambassador said it was vital to secure lasting peace so that families could feel secure, support themselves and rebuild their lives.

“I think, more than ever, it is so important that, on November 12, we keep the deadline and that there is a transition for a peace agreement,” she said. “Everybody here has hope and they’re not asking for much except for safety for their family, to be able to provide for their family, and they have such trust and faith.”

The Ambassador also took part in a peacekeeping patrol along the Nile with the Bangladesh riverine contingent which helps protect civilians and build peace in the area. She praised their work and the efforts of all UN personnel serving in South Sudan.

“I want to talk about the United Nations and how important it is that they have been here,” she said. “They are the salvation for many people here and I think it’s important that the Government see that and take responsibility also and make a very smooth transition [to peace].”

The Head of UNMISS welcomed the Ambassador’s visit which came at a critical and precarious time and would help maintain momentum in the peace process, particularly the formation of a unity government.

“The Security Council made their own minds up about this. They heard everybody. They spoke to the President. They spoke to Dr. Riek Machar. They spoke to all of the signatories. They gave them an enormous amount of time,” he said.

“They came to the conclusion that it is important to keep the momentum of the peace agreement going and to have that transitional government start on the 12th of November and to resolve the outstanding issues as it goes forward.”

“We cannot forget those issues that are still yet to be finished but, at the same time, let’s move forward and have a peaceful transition.”