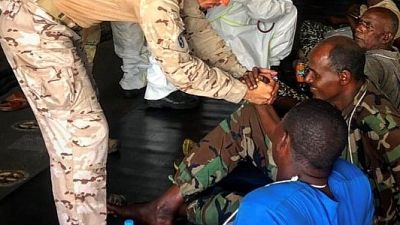 On the morning of 20 October 2019, EU NAVFOR Somalia Operation ATALANTA received a request to assist a vessel belonging to the Somali Navy in distress some 60 km north of Cadale. The vessel had reportedly experienced mechanical difficulties and the crew was concerned for their safety.

EU NAVFOR Somalia launched a maritime patrol reconnaissance aircraft (MPRA) to determine the location of the Somali Naval vessel in distress. After contact and coordination with the Somali Navy Headquarters and the Mogadishu Port Police, Operation ATALANTA decided to send its closest vessel to assist the Somali Navy personnel. The Spanish frigate ESPS Canarias had been on its way to make a scheduled port visit nearby when the distress call altered the mission.

The Canarias’ boarding and medical teams reached the Somali vessel early Monday morning and provided the sailors with food, water and technical assistance. After the seven Somali Navy sailors were brought to safety they thanked EU NAVFOR Somalia for their efforts.

“Our team has headed the ESPS Canarias with great tact and efficiency upon reacting on this emergency request,” said Operation ATALANTA Commander Major-General Antonio Planells Palau. “Operation ATALANTA remains committed to maintaining security in the waters off the Somali coast and supporting other actors with shared objectives in the region. We are proud to have assisted these Somali Navy sailors to safety. Well done everyone.”

EU NAVFOR Somalia operates in an Area of Operations that covers the Southern Red Sea, the Gulf of Aden and a large part of the Indian Western Ocean. In addition to deterring piracy and contributing to the free flow of commerce, Operation ATALANTA’s mandate includes monitoring of fishing activity off the coast of Somalia, protecting vessels of the World Food Programme (WFP) and African Union Mission in Somalia (AMISOM) and supporting other EU missions and international organisations working to strengthen maritime security and capacity in the region.