Health clinic gets a new roof in rural Mozambique 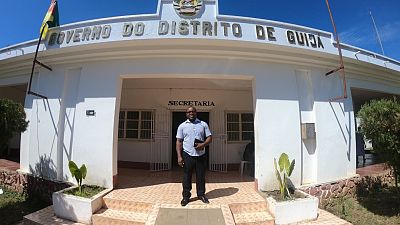 Come rain or shine, everybody deserves access to proper health care, and the first step to its provision is building and maintaining medical infrastructure. Not only does the infrastructure have to facilitate the medical operations, but it also has to be within range of the people who need it the most. This is particularly difficult for rural people living in the least developed countries (LDCs).

In the Guijá District of Mozambique, a health clinic established in 1995 in Nalazi lost its roof due to unpredictable weather conditions – a recurring theme stemming from climate change, according to the local authorities. The clinic served as a center point for many neighboring villages until the damage was inflicted in 2012 due to a storm. Because of the high demand for medical support, the clinic still existed with make-shift wood and scrap metal roofs, but the medicine supplies were exposed to the rain and, during the wet season, it was difficult to keep the clinic open.

Although the Guijá district was not one of the areas fully affected by the Hurriance Idai, the area is very susceptible to weather changes. This is not only demonstrated by the damage to the infrastructure but also by the unpredictability of the agricultural gains. According to a report produced by UNITAR and UNOSAT, the Guijá district experienced heavy rainfall and flood events in January 2013, which has prompted a humanitarian response. The report stated: “There has been a dramatic increase of flood waters from 23rd – 24th January 2013.”

The management committee of the clinic reached out to the governor and the consultative council, who then submitted a petition for the rehabilitation of the clinic. The endeavor was then prioritized as the need for better health care grew larger.

In December 2017, UNCDF, with development finance assistance from Belgium and the support of the local government, stepped in to work on the rehabilitation of the roof, which was completed in the April 2018. Since July 2018, the Swedish Embassy in Mozambique has been supporting the technical assistance embedded into the Provincial Directorate of Planning and Finance to ensure the maintenance and sustainability of the social infrastructure development.

“The new and improved clinic was very beneficial for the community,” said Antonio Eugénio Machava, a local leader. He further explained: “The clinic now serves 14,187 people from Nalazi plus 9,400 from 10 surrounding villages.” The need for a properly functioning clinic is high as the area has many cases of malaria. The health care providers tackle this issue in several ways, including treatment, prevention and awareness. They provide medication for treatment, but also provide treated nets for prevention of mosquito bites.

Another reason this clinic is vital for the livelihoods of the local community is because of the prevalence of diarrheal disease in Mozambique, which remains a leading cause of illness and death in rural areas. It is still a major cause of morbidity if left untreated. With the newly rehabilitated roof, the new clinic can house patients and protect the medications. The new roof is designed to be climate-resilient.

Along with the new roof came 4 more jobs, which allowed for more patients to be taken care of. The maternity rate improved after an addition of a section for maternal health. The clinic also used the storage space now to stock antibiotics, antimalarials and HIV medication.

Jeremias, 35, is a patient at the clinic who walked 20km to seek medical help for back pain and a stomach ache during pregnancy. This was the closest maternity clinic to her village. She comes in for trimester consultations and plans to give birth at the clinic. Raquel Mangai is another patient who said that she finds the consultations very beneficial. Shelter from a storm is now more of a reality.

Ramon Cervera, the UNCDF Programme Manager in Mozambique, said: “Following Hurricane Idai, there is no telling when a natural disaster will hit the East coast of Africa. For LDCs, the need for health infrastructure that is resilient to climate change is ever so pressing. This is why there is a greater need to explore the areas that need it the most and to cater to the needs of the rural communities who can benefit from it.”

UNCDF offers “last mile” finance models that unlock public and private resources, especially at the domestic level, to reduce poverty and support local economic development. UNCDF pursues innovative financing solutions through: (1) financial inclusion, which expands the opportunities for individuals, households, and small and medium-sized enterprises to participate in the local economy, while also providing differentiated products for women and men so they can climb out of poverty and manage their financial lives; (2) local development finance, which shows how fiscal decentralization, innovative municipal finance, and structured project finance can drive public and private funding that underpins local economic expansion, women’s economic empowerment, climate adaptation, and sustainable development; and (3) a least developed countries investment platform that deploys a tailored set of financial instruments to a growing pipeline of impactful projects in the “missing middle.’’