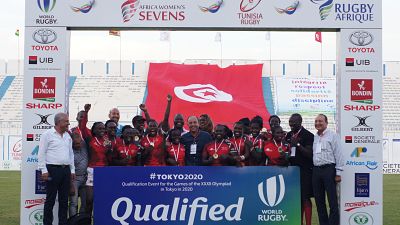 Kenya will compete in their second Olympic Games after finishing runners-up to South Africa in the Rugby Africa Women's Sevens Championship in Monastir, Tunisia.

The Lionesses become the eighth team to book their place in the line-up at the Tokyo 2020 Olympic Games rather than South Africa because the South African Sports Confederation and Olympic Committee rules declined the invitation.

As well as providing a route to Tokyo 2020, the Rugby Africa Women’s Sevens also determined which of the region's teams would be in the mix to secure core team status on the HSBC World Rugby (http://www.World.Rugby) Sevens Series 2021 – South Africa and Kenya as it turned out.

Both finalists breezed through the pool stages on day one with neither conceding a single point en route to the tournament's showpiece match. South Africa enjoyed big wins over Uganda (32-0), Zimbabwe (31-0) and Zambia (36-0), while Kenya had too much firepower for Ghana (36-0), Botswana (51-0) and Senegal (36-0).

South Africa maintained a clean sheet on day two in seeing off Morocco 42-0 in the quarter-finals and then Madagascar 29-0 in the last four. Kenya, meanwhile, kept their title defence alive with victories against Zimbabwe (36-5) and Tunisia (19-0).

Before the final, Madagascar took the bronze medal after a hard-fought 5-0 win over Tunisia. Both teams, however, will get another chance to qualify for Tokyo 2020 via the World Rugby Olympic Repechage tournament next June.

Already assured of Olympic qualification, Kenya started the better of the two teams and led 14-10 at half-time but a third try of the match from South Africa's Rights Mkhari two minutes from time saw them clinch their seventh African title.

MOVING ON TO SUVA

The remaining women’s regional qualification tournaments are set to take place next month, with the Oceania Rugby Sevens Championship in Suva, Fiji, on 7-9 November and the Asian qualifier in Guangzhou, China, on 9-10 November.

The final two places in the women’s competition in Tokyo 2020 will be determined by the World Rugby Olympic Repechage tournament in June 2020 with Madagascar and Tunisia joining France, Russia, Argentina, Colombia, Mexico and Jamaica as confirmed participants.

The HSBC World Rugby Women's Sevens Series 2019 acted as the principal route for qualification for Tokyo 2020 – the only qualification route that would have been open to South Africa, had they played on it – and it was champions New Zealand, USA, Canada and Australia who claimed the coveted top four spots to secure their places on sport's biggest stage.

As the host nation, Japan automatically qualified, while Great Britain and Brazil were the first regional qualifiers and have now been joined by Kenya.

For more information on the qualification process for Tokyo 2020, click here (http://bit.ly/2P0LhpE).