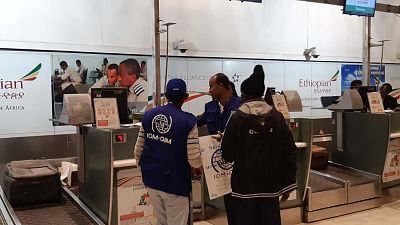 The International Organization for Migration (IOM) in Ethiopia organized on Tuesday its first international charter flight carrying 154 Somali refugees to be resettled in Germany.

The group had been residing in Jijiga and Dolo Ado refugee camps in southern Ethiopia. They included 63 males and 91 females, 47 of whom are minors.

IOM has supported the German Resettlement Programme in their efforts to resettle 500 refugees living in Ethiopia to Germany since March. These efforts are closely coordinated with the Ethiopian Government’s Agency for Refugees and Returnee Affairs (ARRA), the UN Refugee Agency (UNHCR) and the Federal Government of Germany.

An additional 220 refugees will depart for Germany on a second IOM-chartered flight in mid-November. The majority of these people have already undergone the necessary interviews and health assessments.

“It is important that we facilitate the smooth resettlement of refugees by providing safe transportation,” said Milun Jovanovic, Operations Officer with IOM Ethiopia. “We are happy that refugees enjoyed this facilitated charter flight from departure to destination, with no hassles faced.”

For the past 15 year, IOM Ethiopia has been involved in relocating refugees to more than 16 countries, including the USA, Canada, Australia, Norway and the European Union through resettlement, family reunification and humanitarian admission programmes. Since 2016, the Organization has arranged 36 domestic charter flights for refugees travelling to Addis Ababa from camps throughout Ethiopia.

In 2019 alone, IOM has assisted 4,000 refugees to resettle to new countries together with UNHCR. The Organization facilitates case selection and processing, health assessments, movement from camps and departure logistics. IOM teams also conduct pre-departure orientation to ease integration of refugees.

Resettlement provides millions of refugees worldwide with protection and the opportunity to build new lives for themselves and their families – particularly for those whose life, health or fundamental human rights are at risk in the country where they first sought refuge.