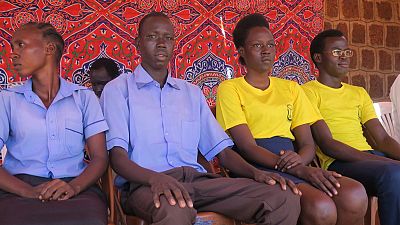 Words such as ‘boundaries’, ‘ceasefire’, ‘diversity’, ‘implementation’, ‘constitution’, and ‘democracy’ are some of the few that they struggled to spell out, yet the Aweil students seemed to be enjoying themselves in a spelling contest that also served as a learning forum.

Organized by the United Nations Mission in South Sudan (UNMISS) the ‘Spelling Bee’ competition focused on the operative words in the Revitalized Agreement on the Resolution of the Conflict in South Sudan (R-ARCSS).

After a tie and a decisive fourth round, Akot won the ultimate prize of the contest: an UNMISS-branded medal and a school bag.

“I will start disseminating this agreement to my family from today,” said an excited Akot. “We need to accept peace so that it prevails in South Sudan,” he added.

Akuol, who won the third prize, said education was not only about being taught at school, but also at such events.

“UNMISS is making it easier for us to be the future leaders by giving us motivation through such a competition,” said Akuol, referring to the importance of being educated on the South Sudanese peace agreement through competition.

As a part of the preparation, contestants were provided with an abridged version of the peace agreement ahead of time to acquaint themselves with the content of the document. The confidence and courage displayed by the contestants did not diminish a few stutters on stage, though, as the contestants were expected to both spell out a word and give its meaning.

“I lost the contest due to not giving the correct meaning of the words, which was the difficult part,” said Nyibol Augustino, a 17-year-old female student who found the word “reconciliation” a bit daunting to spell. “I will try next time,” vowed courageous Nyibol, who was knocked out in the second round of the competition.

The activity which drew 400 male and 400 female students received loud applause and ululation from the audience as they supported their candidates on stage.

“I have learnt a lot on issues of governance and reconstruction from this competition,” said Peter Deng, one of the spectating students.

The ‘Spelling Bee’ competition is an academic activity that targets students in different grades, from primary to secondary school levels.

“Such a ‘Spelling Bee’ peace competition is an educative program,” said Joseph Lual Dengdit, Advisor to the Minister of Education in the Aweil area, who said he was also spelling the words from the comfort of his seat during the contest.

“To go through the competition was not easy, and to the winners: you have tried because of the knowledge invested in you,” he concluded.

Speaking at the event, Mariama Dauda of the UNMISS Civil Affairs Division, Aweil Field Office, urged the students not to take the competition for granted.

“Ten years down the line, most of you will make it to the shortlist of governor in Aweil,” said Dauda, who represented the Head of Field Office. “This means you are not far away from decision-making [positions], she counselled.”

Students from the four schools entertained the audience with music, drama, poetry, and peace messages.