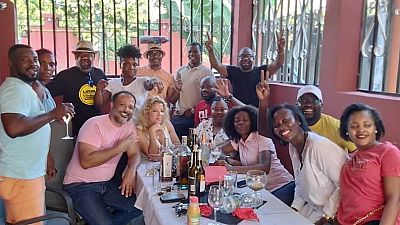 I am a Venezuelan American.  That makes me a Hispanic American.  As many of you know, Hispanics are a mix of races:  indigenous people, European, and Sub-Saharan African (not to mention that some of those Europeans [Spaniards] were already mixed with North Africans before they had left Spain).  Prior to the arrival of Europeans, the indigenous people of North and South American had already mixed with Asians through the Bering Strait.

During and after colonization, the Americas started to show different shades of color.  In North America, this coloring process was a bit slower, since the pilgrims came to America with their established families.  On the other hand, in South America, different shades of skin color appeared sooner.  Most conquistadors came to the new world without spouses or family, so they quickly mixed with the Native American women.  Their offspring were called “mestizos.”

Hispanics like me are a mix of different races, rhythms, and colors. Living here in Africa, I feel close to Africa and connected to the local culture because I recognize the rhythms, the pounding of the drums of southern Equatorial Guinea, the yuca, batata, coco, cassava, yam, coconut, malanga, plantain, okra, fresh fish, and the banana leaf.  These are principal components of my own culture.

While the connection between my culture and African culture is clear to me, I think Africans underestimate the importance that African culture has on the Americas.  We should all remember, however, that the African slaves in the Americas kept their passion for life by maintaining their culture and religious practices through music, dance, and food. That is why in the United States today, we have rhythms like soul, jazz, rock, country, and rhythm and blues.  Likewise, in South America, there are the bomba, salsa, merengue, mambo, and samba.  All these rhythms contain heavy African influence.

Africans need to understand that their contribution to all the cultures in the Americas is deep because this influence displays of the spirit and strength of their ancestors.  African influence is found throughout North and South America in music, dance, food, as well as the product of slave labor that built the economies of the New World.

In the Americas, we are made, in part, of Africa.  No one can deny it.