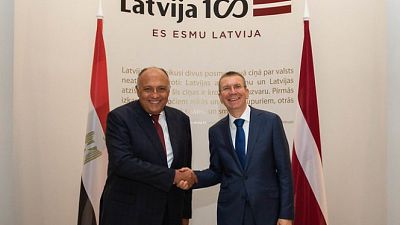 On 17 October 2019, the Latvian Minister of Foreign Affairs, Edgars Rinkēvičs, met with the Minister of Foreign Affairs of Egypt, Sameh Shoukry, who was in Latvia on an official visit. It is noteworthy that this is the first visit in history to Latvia by an Egyptian Foreign Minister to Latvia. The Ministers discussed bilateral economic and political relations between Latvia and Egypt, the latest developments in the Middle East and the EU-Egypt dialogue.

The Ministers expressed satisfaction with the friendly character of the bilateral relations and discussed the ways to expand economic and political contacts. Latvian exports to Egypt have increased considerably in 2018, reaching 70 million EUR. Thus Egypt now ranks 24th among Latvia’s major export partners. Evaluating developments in Egypt and the region, the Latvian Foreign Minister expressed support for the strengthening of the dialogue between the EU and Egypt. The Ministers also discussed the state of affairs on the Horn of Africa region.

As part of the visit, the Ministers signed an Agreement between the Government of the Republic of Latvia and the Government of the Arab Republic of Egypt on a mutual visa exemption for the holders of diplomatic passports. This is the sixth intergovernmental agreement between the countries. After taking effect, it will enable the holders of Latvian and Egyptian diplomatic passports to enter, exit, transit and stay in the territory of the state of the two countries that does not exceed 90 days in any 180-day period.

As part of his visit, Minister Sameh Shoukry also met with the President of Latvia, Egils Levits, and the Speaker of the Saeima (Latvian Parliament), Ināra Mūrniece, as well as laying flowers at the Freedom Monument. The Minister went on a tour of the Museum of the Occupation of Latvia and the National Library of Latvia, where he presented a gift from the Bibliotheca Alexandrina.

Distributed by APO Group on behalf of Ministry of Foreign Affairs of the Republic of Latvia.
Media files