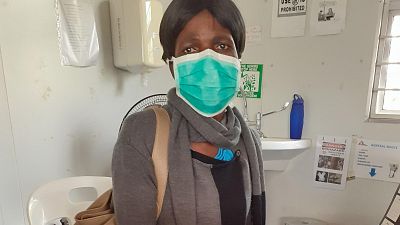 Twana Bhembe witnessed the devastating effects of tuberculosis (TB) when her sister died from the disease in 2011. That was before she and her husband were each diagnosed with the disease, a year apart.

TB has been a frequent visitor not just in Bhembe’s family but across the Kingdom of Eswatini. But those visits are a thing of the past now.

Once labelled the country with the world’s highest TB incidence, the Kingdom has turned the tide and reduced the scourge by more than half. An alarming rise in TB cases was noted in the early 2000s, threatening the country’s entire population of slightly more than one million people: the mortality rate was among the highest in the world, at 18 per 100 000 people in 2003.

At that time, HIV and AIDS were considerable public health threats and drug-resistant strains of TB had developed, all of which exacerbated the TB epidemic. “Close to 12 000 cases of TB were being reported annually, with a very high death rate, poor case finding and poor treatment outcomes,” says Themba Dlamini, the National TB Programme Manager.

“Transmission was also high, leading to an unacceptable incidence of 1250 TB cases per 100 000 people.”

The response roped in an array of partners, including the KNCV Tuberculosis Foundation, the Global Fund to Fight AIDS, Tuberculosis and Malaria, Médecins Sans Frontières and the Columbia University (USA) Mailman School of Public Health, with guidance from the World Health Organization (WHO). The country received US$40 million from the Global Fund to fund the emergency response, running alongside the Government’s general strategic plan.

“The emergency plan had intervention points that we knew we needed to hammer hard for things to change,” says Dlamini. Interventions included robust awareness, the introduction of rapid diagnosis for drug-susceptible and drug-resistant TB, which reduced the waiting period for results.

The introduction of new diagnostic tests also allowed for drug-resistant TB tests to be done in country instead of being sent to South Africa, which had been the previous practice.

Diagnostic sites increased, from 13 to 48, as did the TB management units, to 180 of the 204 clinics in the country. There was also involvement of the private sector where TB clinics and laboratories were set up in the major private clinics, which then received drugs and technical support from Government and were included in quarterly review meetings.

Before the TB management units were set up, the treatment drop-out rate had been high, at 15%, because drugs were available in only 13 sites, which compelled people to travel long distances to the nearest location. With the Global Fund assistance, the Ministry of Health was able to hire more people to do intensified case finding – screening everyone seeking health services at a facility.

“Awareness was poor. People would feel better after two months and stop taking the drugs,” recalls Dlamini. “Hence, we deployed 30 adherence officers on motorbikes checking people who missed their appointments and sometimes bringing pills for those who were very sick and could not go to the clinic. Drug-resistant TB patients were given money to go to the hospital and to buy food. We also hired treatment supporters to help them manage side effects because people used to drop out due to side effects.”

The TB programme deployed 369 active case finders who relied on bicycles to trace contacts in communities. People who tested positive for TB were also tested for HIV. To date, 100% of TB patients know their HIV status and 100% of those found to be positive are on HIV treatment.

“We started seeing people coming in early to start treatment, unlike before, when people would deteriorate to a level where it was not easy to treat them,” says Dlamini. “We implemented all these interventions following the WHO guidelines, technical support and capacity building for the programme.”

After all the interventions, hope replaced the scourge in the Kingdom. Incidence was reduced to around 300 cases per 100 000 population in 2017, from the 1250 it had been in 2009. Because of her sister’s death in 2011, Bhembe, now 39, knew the disease too well. But then her husband was diagnosed with TB in 2015. A year later, she too, tested positive with both TB and HIV.

Some three months after starting treatment, Bhembe began vomiting each time she took the tablets. This led to her developing drug-resistant TB. Her doctors switched her to the injectable treatment for the drug-resistant strain.

“I spent a month admitted at the drug-resistant TB hospital in Moneni. Later, the doctors discovered that I was losing my hearing. Despite all these challenges, I knew I was going to be okay, and I was determined to adhere to the treatment schedule as advised by the doctors,” says the mother of two children, grateful to the Government to be alive. Her husband also beat the diseases and they are both free of TB.

“I thank the Government for providing the treatment free of charge because, if it was paid, I would not have afforded it. And I would have died. Now I am feeling fine and happy,” she says.