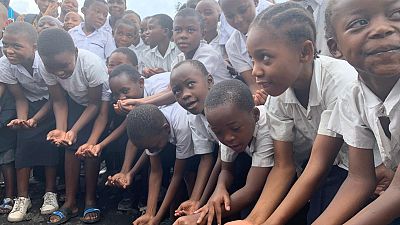 “These hands are our most important tools of work but can also be a source of disease and death,” the Nyiragongo Health Zone director, Dr Dan Kapuku, tells the Kiziba community members who have gathered to learn better handwashing practices in the era of Ebola and other infectious diseases.

The mood among the Kiziba residents who have gathered outside their health clinic is of confidence. When Dr Boniface Hakizimana, the Team Lead for Infection Control and Prevention of the World Health Organization (WHO), tells them that “Ebola came here but you defeated it by mostly washing hands,” a celebratory cheer erupts from the group. Thanks to awareness campaigns by the Government and WHO, they also know what else it takes to guard against the spread of the Ebola virus disease. A sense of pride, even a sense of empowerment, comes charging from the crowd of people who have lived with the threat of one of the most feared diseases in the world for almost a year.

After the first Ebola patient was confirmed in Goma, a massive campaign was launched to encourage communities to practise better hygiene, especially handwashing, to stop transmission of the virus. The effort bore results – the spread of the virus was curtailed.

Now this success is being accelerated by the Ministry of Health with WHO support to not only stop Ebola but other diseases, like cholera and typhoid, which are prevalent in the area.

“We fought Ebola together and eliminated it in our community. Let’s do it again to all other diseases,” hollered Dr Kapuku. “Let’s do it the same way because it is unacceptable that we are losing people because of cholera.”

“I want to live a long life, but being sick all the time will not make that happen,” says Riziki Bindu, a pregnant woman waiting for a check-up at the Kiziba Health Centre. “We now wash hands to prevent sickness, and I insist that my family do the same.”

It is not enough to just wash hands. The point is to eliminate all germs that cause disease and create new hygiene habits in the community. This message, says Dr Hakizimana, has failed to take root in the country in the past.

“There is no culture of handwashing here, and people do not link the spread of disease to it,” he adds. “But we are showing them how it affects families when a loved one gets sick and how it affects education when children are unable to go school because of sickness.”

For the Kiziba community, the message seems to be sinking in. Around the corner from the health centre, school children line up for a tutorial from a health worker on how to properly wash hands. They take turns following the prescribed steps to apply water, soap and scrub.

These children will grow up in this era of improved hand hygiene practices, which will give them more assured freedom from communicable diseases and longer healthy lives.