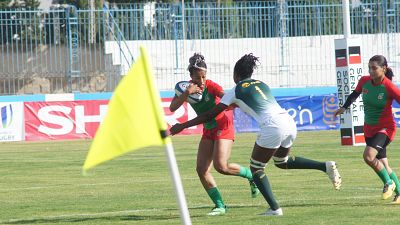 The second day of the 2019 Rugby Africa (RugbyAfrique.com) Women’s Sevens sponsored by Société Générale has come to an end on Sunday and so did the tournament. Kenya lost the final game to South Africa 14-15, however, they still managed to qualify for the Tokyo 2020 Olympics. South Africa and Kenya are both entitled to participate now in a qualification tournament for the HSBC World Rugby Sevens Series. Tunisia and Madagascar are qualified for the Olympic repechage tournament June next year.

The day started at 09:30 with South Africa beating Morocco 42-00. Madagascar were up next with a victory against Senegal 24-05, while Uganda suffered a 00-33 defeat against the Tunisian hosts.  Kenya beat Zimbabwe 36-05 while Ghana had the final say in their clash against Mauritius, which ended 29-10.  Zambia wrapped up the first round of the games with a 24-05 victory over Botswana.

South Africa comes out on top against Madagascar 29-00 in the semi-final game while host Tunisia was shown the way out by Kenya after a 00-19 loss.  Madagascar went on to claim the third place after beating Tunisia 05-00.  The final clash between South Africa and Kenya resulted in a victory for the South Africans by a small gap. The final result was 15-14.

Alongside the tournament, many kids from different schools across Tunisia, gathered for the Get Into Rugby event which was organised in partnership with Société Générale at the training grounds near the main stadium. The U12 kids got to attend a couple of games from the tournament to get a better feel for the atmosphere. The event was wrapped with a group photo with Rugby Africa president, Khaled Babbou, along with many Rugby Africa and Tunisia officials.

“I was very happy with the tournament and the finals. I want to thank the organisers for doing a perfect job, to the Tunisian Rugby Federation for making huge efforts to ensure everything went well. The level of play is improving, the refereeing, and everything that has to do with the evolution of rugby is getting better. I hope we move to higher levels in the next edition. I ask all teams to prepare well, because we have seen many surprises in this tournament. Kenya for example, lost to South Africa by a very small margin. I hope that in the future, things will improve on every level, and I am confident they will.”

“It was an amazing experience. I am happy for the young girls who were able to express themselves. I’m quite impressed with the performance of my players. We really wanted to win this tournament, but things didn’t go our way. We knew they we ready for us since they knew how we were playing so we changed our structure and played heads up rugby. Things could have been better for us but I’m happy with my players nonetheless.”

“I’m very proud of our ladies. In the beginning, we struggled to find our rhythm, but today they stepped up. Kudos to Kenya, they played really well, at times, I thought we kept them in the game, but I guess that’s the game of sevens. People want to see an entertaining match and both teams delivered that. The tournament was fantastic, this is our first time in Tunisia, it’s a wonderful place and the people are very friendly. The organisation was very well put together so we were really happy to be here.  ”