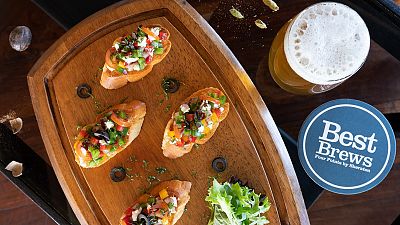 The Brand Celebrates Global Growth with “Four Points Around the World” Series, Showcasing Best Brews in Each Corner of the World

POINT 1: Four Points by Sheraton, one of Marriott International’s fastest-growing hotel brands, is celebrating its rapid international growth by taking its love of craft beer one pint further. As part of a global series of biergarten-themed events, the recently opened Four Points by Sheraton Dar es Salaam, New Africa Hotel in Tanzania will showcase a collection of signature local craft beers from October 18 – 26. Guests are invited to the pop-up beer garden at the hotel’s poolside to enjoy a lively atmosphere, pub games and a selection of crafted brews.

Four Points by Sheraton Dar es Salaam, New Africa Hotel has partnered with Crafty Dee’s http://bit.ly/32guVgp, a local nano brewery, to create a limited edition speciality brew called ‘The English Summer’, a hybrid beer with an easy drinking profile that will be available only at the pop-up. To compliment the brews, a German-inspired food menu curated with local ingredients and inspired by the sights and sounds of Dar es Salaam will create the city’s own Oktoberfest.

POINT 2: Best Brews is a guest experience enjoyed at Four Points hotels worldwide, offering a taste of authentic, local flavour and culture through craft beer which has been chosen based on taste, popularity, quality and proximity to each property. While oceans, borders and languages can distance us, sharing a beer is a universal connector. The Four Points Around the World pop-up events will celebrate this connection by rotating select craft beer offerings from various countries and regions. Brews from the United States, Canada, Asia, Europe, Latin America, and Africa will offer a figurative and literal taste of Four Points’ growing portfolio, while highlighting the unique brewing styles and local flavours from different cultures.

POINT 3: “We look forward to welcoming guests to the first ever Four Points Best Brews pop up in the city and offer a taste of Africa as part of this global series while delivering the brand’s signature warm and uncomplicated yet comfortable service,” said Siddharth Chaudhry, General Manager Four Points by Sheraton Dar es Salaam, New Africa Hotel.

POINT 4: Four Points has proven to be a global hit with its ability to meet the increasing demands of the modern, everyday traveller. The brand is experiencing incredible growth momentum with more than 275 hotels currently open, Four Points has nearly 120 hotels in the development pipeline, with new hotels located in nearly every corner of the globe.

Distributed by APO Group on behalf of Marriott International, Inc..

About Four Points by Sheraton:
Four Points by Sheraton (http://bit.ly/2VEcyiW), part of Marriott International, Inc., includes nearly 300 hotels in more than 40 countries and territories. At Four Points, travel is reinvented and guests can find the timeless style and comfort they’re looking for with genuine service and everything that matters most, all around the world. Four Points hotels can be found in big urban centres, by the airport, near the beach, and in the suburbs. Each hotel offers a familiar place with an authentic sense of the local, and friendly genuine service where guests can relax and unwind, watch local sports, and enjoy the brand’s Best Brews program. To learn more, visit us online (http://bit.ly/2VEcyiW) and stay connected to Four Points on Facebook (http://bit.ly/2IRbjrs). Four Points is proud to participate in Marriott Bonvoy, the new name of Marriott’s travel program replacing Marriott Rewards®, The Ritz-Carlton Rewards®, and Starwood Preferred Guest® (SPG). The program offers members an extraordinary portfolio of global brands, experiences on Marriott Bonvoy Moments and unparalleled benefits including earning points toward free hotel stays and nights toward Elite status recognition. To enroll for free or for more information about the program, visit MarriottBonvoy.com (http://bit.ly/2IQpBbZ).

About Marriott International:
Marriott International, Inc. (NASDAQ: MAR) (http://www.Marriott.com) is based in Bethesda, Maryland, USA, and encompasses a portfolio of more than 7,000 properties under 30 leading brands spanning 132 countries and territories. Marriott operates and franchises hotels and licenses vacation ownership resorts all around the world. The company now offers one travel program, Marriott Bonvoy™, replacing Marriott Rewards®, The Ritz-Carlton Rewards®, and Starwood Preferred Guest®(SPG). For more information, please visit our website at http://www.Marriott.com, and for the latest company news, visit http://bit.ly/33sb9yL. In addition, connect with us on Facebook (http://bit.ly/2lFUYgM) and @MarriottIntl on Twitter (http://bit.ly/2kCEy8G) and Instagram (http://bit.ly/2kBcSB3).