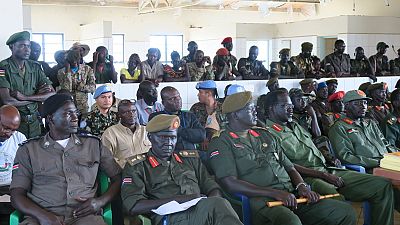 A significant aspect of the revitalized peace agreement was realized in Wau recently with the graduation of the first batch of trainers for unified forces – a necessary step in the fulfilment of the agreement’s chapter on security arrangements.

“We conducted the training for the unified forces instructors as per the peace deal signed in September 2018, to expedite the process of troop movement to cantonment [sites] and immediate training of the necessary unified force of 83,000 to take responsibility during the transitional period,” said Brigadier General Makur Akec Reec Mangok, Commandant at the Mapel non-commissioned Academy where the training took place.

Brigadier General Mangok was speaking at the graduation ceremony, where 533 instructors – including 133 women – from South Sudan People’s Defence Forces (SSPDF), the Sudan People’s Liberation Army in Opposition (SPLA-iO), and South Sudan Opposition Alliance (SSOA) received their certificates, having completed the training for the Bahr el Ghazal area from 17 September to 01 October 2019.

“I am optimistic that the instructors will replicate the same to the unified forces during their upcoming training,” he said.

“What we have [emphasized] here is that we need to be part of the effort to bring peace and stability, not to be a source of instability,” said Colonel Martin David, a newly trained instructor from the SSPDF. “During the 45-day training I gained skills in different areas such as confidence- and trust-building, civil-military cooperation, conflict prevention, management and resolution, disarmament, demobilization and reintegration, among others,” he noted.

Colonel Lul Rai, a trainee from SSPDF, said that though she is a woman, as a soldier, it is normal to equally engage with men and share the same responsibility in everyday activities.

“We’re all trainees gathered here representing different political parties,” she said. “But we are close family members, though we have different political views. I really felt happy and comfortable to be trained with my brothers and sisters in this big conference hall today,” she added.

For Colonel Abdella Awass Jidi, the training has prepared him to impart new skills and knowledge to other soldiers. The bonding of warring forces through joint training, he says, was certainly an essential bridge to sustainable peace in South Sudan.

From here, the graduating instructors will be deployed to different training centres in the Greater Bahr el Ghazal area to train and build the capacity of forces merged from the previous warring parties.