From one Ebola front line to another in the Democratic Republic of the Congo: Dr Didier Mwesha, WHO Infection Prevention and Control Expert 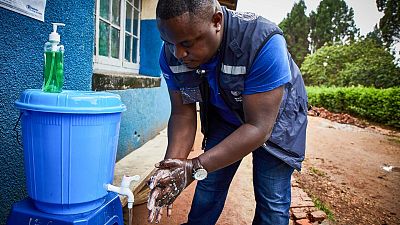 As Didier Mwesha passed his one-year anniversary on the front lines of the Ebola response in the Democratic Republic of the Congo (DRC), the numbers were climbing still. As of mid-June 2019, there were some 2071 Ebola virus disease cases in the 12-month period of the tenth outbreak, with 1396 of them having passed away. And Uganda had just confirmed an outbreak at the shared border.

It was the kind of situation that might encourage frustration. Dr Mwesha instead focused on the good work being done.

Dr Mwesha is an expert in infection prevention and control in health facilities. Although he is from the DRC, he had been working for the World Health Organization in Guinea as of 2015 on what was the worst Ebola outbreak in recent history. Then in 2018, in what would be the ninth outbreak in the DRC, he was assigned to go home and help in that Ebola response.

He was sent to the far west of the country, where he joined hundreds of other colleagues on that front line, which they were able to control within three months.

Then came news of a new outbreak in the north-eastern corner of the country.

“We were wrapping up in the Equateur Province, when we heard about the new outbreak in the east,” recalls Dr Mwesha, still on the current front line in the Ebola response and working on a Sunday because there are no days off while the numbers continue to climb. “I was among the first people to arrive in Mangina, which was the initial hotspot in the current outbreak.”

Even before the first case was detected in Butembo city, which is about a two-hour drive from Mangina, Dr Mwesha was visiting health facilities to check on their infection prevention and control standards. Kitatumba Reference Hospital was the first health facility he evaluated. “My initial impression was that it was very dirty. No one was wearing personal protective equipment and hands hygiene was not systematic.”

He quickly moved into action, briefing staff and bringing in essential supplies. In comparison with the outbreak in the west, Dr Mwesha found the situation in Butembo much more difficult. This was the region’s first experience with Ebola, and there was a lot of insecurity and lack of trust in the authorities by the communities.

“There’s a general suspicion of our work, and we see that even with health workers who wonder about our agenda,” says Dr Mwesha.

The infection prevention and control teams work not only in health facilities but must also decontaminate households where someone confirmed with Ebola virus disease lives. To keep Ebola from infecting more community members, response teams burn the bedding of the infected person and then spray the household with a solution of chlorine and water. Even though the family is provided with a new mattress and bedding, there is a great deal of resistance.

“This is the most difficult aspect of my work. People don’t want you to enter their home, and we sometimes encounter violence,” says the doctor.

To improve the community acceptance of their work, Dr Mwesha says infection prevention and control teams have changed their strategy. Now, with the support of psychologists and community workers, families are given a full briefing and are shown how to decontaminate their household under supervision.

“Now families participate in the decontamination process, and we are encountering less resistance from communities,” he explains.

Health facilities in the Butembo area have made huge improvements, and Ebola infections linked to hospital stays have dropped from around 40% of all cases in March 2019 to 15% currently.

WHO uses a scorecard to measure a health facility’s infection prevention and control standards. In December 2018, 65% of structures evaluated had a score of less than 40%. Now, only 15% of structures have a score lower than 40%.

Dr Mwesha says the most satisfying aspect of his front-line work are the students. Thanks to funding from the Paul Allen Foundation and in partnership with the Medical School of the Université Catholique du Graben in Butembo and the DRC Ministry of Health, 50 medical students were trained in infection prevention and control and then placed in high-risk health facilities in their communities of origin.

The students mentor health workers, and because they are from the communities and understand the culture and language, they are more easily accepted than WHO staff or other experts coming from outside the community.

“The students did great work. They were so engaged, and we saw infection prevention and control standards in health facilities they worked in improve significantly,” praises Dr Mwesha. “You know, for the past year, I’ve been working everyday – for example, here you are interviewing me on Sunday and I’m working. But my work with the students has really motivated me. I feel like when I leave here, I will be leaving behind a generation of medical professionals who will have benefited from my expertise in infection prevention and control.”

Download logo
From one Ebola front line to another in the Democratic Republic of the Congo: Dr Didier Mwesha, WHO Infection Prevention and Control Expert (1)