Experience will be key for Imbokodo – Mpupha 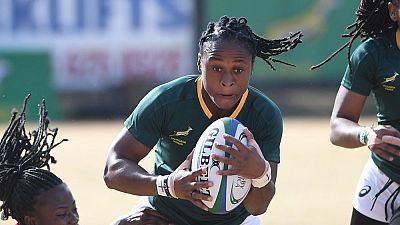 The experience of having played at this stadium and in this tournament will have a huge influence in the Springbok Women's Sevens squad's ability to adapt to the challenges of the Rugby Africa Women's Sevens tournament at Mustapha Ben Jannet Stadium in Monastir, Tunisia this weekend.

That is the view of Imbokodo captain Zintle Mpupha, after their arrival from Cape Town (via Dubai) at the northern tip of Africa, where the best 12 teams from the continent will contest podium places on Saturday and Sunday.

Mpupha will lead a team with only a handful of players not having played in Tunisia before, and said the knowledge of local conditions will allow them to focus on their own game and what they want to achieve out of the tournament.

“We are ready, we know what is expected and what to expect – that experience of the squad will enhance our performances,” said Mpupha.

One of the most experienced members of that squad, Nadine Roos, said they are treating the tournament as any other: “The fact that we need to play in the final to qualify for HSBC World Rugby Women's Sevens Series Qualifiers will not determine our mindset; we treat this tournament no different than any other.”

Roos was MVP at the Centrale Sevens and Nancy Sevens in France May, which was their last trip abroad, but for her that is not adding to the pressure to perform in Tunisia.

“I don't see myself as having to perform as an individual; we all have roles to fulfil in the squad,” said Roos.

“As a wing, I need to score tries and when I move closer to the ball in a play-making role, I need to create opportunities for my team mates. We are a pretty versatile squad, and all are comfortable in what is expected of us.”

For Imbokodo forward Rights Mkhari, there is added motivation.

“We want to make South Africa proud, but I also want to make my family proud and all those in the country who supports us,” said the Limpopo athlete.

“We are playing some tough teams here, but we prepared very well for this tournament and I have faith in the rest of my team.”

Mkhari already helped the Springbok Women to qualify for the 15-a-side Rugby World Cup in New Zealand in 2021, and the top try-scorer of that tournament hopes to add to her tally in an Imbokodo shirt as well.

“We are excited to get going. We prepared well and are ready,” Mkhari concluded.