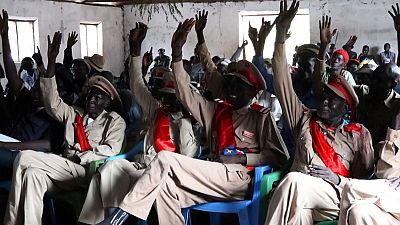 The establishment of a Joint Border Peace Committee and local court expected to handle criminal cases were two of the resolutions agreed on at a peace dialogue organized to tackle persistent intercommunal fighting and gang criminality in a particularly troubled part of South Sudan’s Greater Lakes region.

“Then [after the formation of a transitional government of national unity scheduled for 12 November] we shall carry out a disarmament process in the whole country, taking away all the guns that have caused a lot of violence amongst our people,” commented Mawut Manuel, a minister of the Western Lakes government, pinpointing agreed-on disarmament as another outcome of the peace forum, the first of its kind which also saw female participants.

The objective of the two-day gathering, the first in a long series of previous efforts initiated by the United Nations Mission in South Sudan, was to find common ground to sort out numerous, and complex, issues that have been plaguing six neighbouring ethnic groups for longer than anyone dare try to remember.

The Rup, the Pathiong and the Pakam communities have a history of cattle raiding and revenge attacks spilling across the border between Western Lakes and Gok. A couple of years ago, the situation deteriorated further as the Rup and the Pathiong, having lived in relative peace for some time, started going at each other as well. To make intercommunal relations even more complicated, there are the cow-stealing activities of yet another community, the Joth, hailing from Mayath.

As is all too often the case, women and girls are the ones worst affected when boys and men are clashing violently with each other.

“The dead are either our sons, husbands or other relatives. As women we can’t even cultivate because if the youth find you in the garden, they will rape, beat or kill you. We are asking the men to stop their fighting because we are tired of facing the consequences,” said an exasperated Martha Amur Majak, representing women from Rumbek centre.

Downtown Rumbek, sometimes spared the surrounding bouts of violence, has been increasingly affected since the emergence of two criminal gangs terrorizing communities in Western Lakes and Gok in a distressingly indiscriminate manner. One reason, it seems, is that they have also bonded across ethnic lines.

“What is unique about these criminal gangs is that they are comprising youths belonging to the Pakam, Pathiong, Rup and other communities, which is a rare mixture to behold. These younglings are armed, because they have been dodging the ongoing disarmament process in the area. Citizens have urged the [county] commissioners to bring this gang criminality to an end,” said Gibril Allan Turay, a civil affairs officer serving with the UN peacekeeping mission.

Apart from the formation of the thirteen-member-strong Joint Border Peace Committee and the local court, the dialogue participants also agreed on tasking local chiefs with identifying culprits of wrong-doing and handing them over to law-enforcement bodies. Raided cattle are also to be returned to their rightful owners, and local authorities will be support the government in a peace building process.

“Authorities in both Western Lakes and Gok are going to put military forces on the road from Rumbek centre (capital of Western Lakes) to Cueibet (capital of Gok) to prevent road ambushes, cattle raids and any other crimes,” added Gideon Chol, the Gok Minister of Agriculture present at the dialogue.