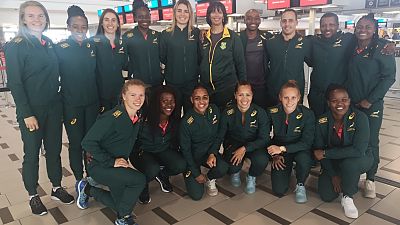 The tournament will be played in Monastir on 12 and 13 October, when the Imbokodo* will try and book a qualification spot to the HSBC World Rugby Women's Sevens Qualifying tournament to be played next year.

Zintle Mpupha, captain, is one of six players that represented South Africa at the Rugby World Cup Sevens in San Francisco last year, while there are also three new faces in the squad for the tournament in North Africa.

Mpupha, Buhle Sonomzi, Zinhle Ndawonde, Zenay Jordaan, Nadine Roos and Eloise Webb all travelled to the USA last year and that experience will stand them in good stead when they face Uganda, Zimbabwe and Zambia in Pool B of the tournament.

Mpupha, along with Jordaan, Rights Mkhari, Mathrin Simmers and Webb, are all fully contracted Imbokodo players and were instrumental earlier this year in helping the Springbok Women 15-a-side team qualify for the Women’s Rugby World Cup 2021 to be played in New Zealand.

Catha Jacobs (Tuks) was also part of Delport's group that won the Centrale Sevens and Nancy Sevens in France earlier this year, while Liske Lategan and Meghan Philips, who will play for the Imbokodo for the first time, represented Tuks in recent months in various tournaments.

“I am happy with the squad,” said Delport.

“We are without Christelene Steinhobel, who is still recovering from an operation, and Alyssa Conley has a foot injury, which is not worth risking for this trip, but there are some very good and experience players in the team. It is going to be a tough tournament no doubt and we realise what is at stake.”

The squad will depart from Cape Town on Wednesday 9 October.

Note to editors: A audio note of Springbok Women's Sevens coach Paul Delport on his team selection is attached.

*Imbokodo has been adopted as the official nickname of the Springbok Women’s Sevens team. Imbokodo is taken from the Zulu phrase “Wathint’ abafazi wanthint’ imbokodo” which translates as “You strike a woman, you strike a rock”, and represents the resilience and courage shown by women in general, and the Springbok Women’s Sevens as they take on the world’s best teams.