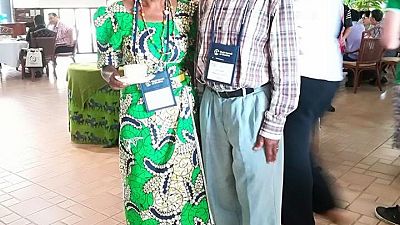 The World Council of Churches (WCC) fellowship joined family and friends of Prof. John Samuel Mbiti in giving thanks for his life and grieving his death on 6 October.

Mbiti, a Kenyan-born Christian religious philosopher and writer, was an ordained Anglican priest, and as of 2005, a canon. Mbiti studied in Uganda and the United States, taking his doctorate in 1963 at the University of Cambridge, UK. He taught religion and theology in Makerere University, Uganda from 1964-74. He held visiting professorships at universities across the world and published extensively on philosophy, theology and African oral traditions.

His book, “African Religions and Philosophy,” (1969) was the first work to challenge the assumption that traditional African religious ideas were “demonic and anti-Christian.”

Mbiti was director of the WCC’s Bossey Ecumenical Institute from 1974-80. The Bossey historian Hans-Ruedi Weber wrote that “the Institute’s most creative work during the second half of the 1970s” was a series of conferences on intercultural theology organised by Mbiti. The aim of the series, in Mbiti’s own typically modest words, was “to bring together African, Asian and other theologians for an ecumenical encounter and dialogue.”

The series of conferences was, in fact, impressive. The first, on “African and Asian Contributions to Contemporary Theology” gathered in Bossey more than 80 participants in June 1976. According to Weber, while pioneering for the Africa-Asia dialogue, “the meeting also became an eyeopener for theologians from Europe and the Americas.”

The second turned out to be the well-known one: “Confessing Christ in Different Cultures,” held in Bossey in July of the following year. The colloquium, Mbiti wrote, “brought together the largest gathering of participants ever to convene at the Ecumenical Institute, Bossey.” It was attended by 110 people from 35 countries. The third, again ahead of its ecumenical time, focused on “Indigenous Theology and the Universal Church.”

The reason for that series of conferences was simple for Mbiti. “Some of us are aware,” he wrote in 1977, “that there is a rapid tilting of Christianity from the northern region to the southern region,” and he goes as far as to announce in the introduction to the second conference that this tilting “is projected to begin after May 1987.”

As an African scholar called to lead the institute of a global ecumenical body, Mbiti pursued and even anticipated intercultural ecumenicity, equally shared by his friend Rev. Dr Philip Potter, former WCC general secretary. It is not by chance that during the conference on “Confessing Christ in Different Cultures” there were discussions on “how one may reach from a contextual to a universal confession of Christ and how such a confession can find expression in liturgy and worship…”

“He will be celebrated for many things: his scholarship, his sense of justice for indigenous people, and his foresight and analysis of the changes in global communions in which we are now living,” said Tveit. “He brought African theology into global ecumenical theology. His presence at the Arusha mission conference, despite his advanced age, is a testimony to his commitment to ecumenism.”

The WCC will always honour Mbiti as a trail blazer, continued Tveit. “His message in the Anthology of Theology in Africa, published in 2017, also bears testimony to his passion and visionary leadership in African theology,” he said. “He has left us with a rich legacy through his publications. May his work continue to inspire us to research and write theology that is relevant to our lived reality.”