The Future of Public Health Response is here: World Health Organization (WHO) Summit explains the lives it will save 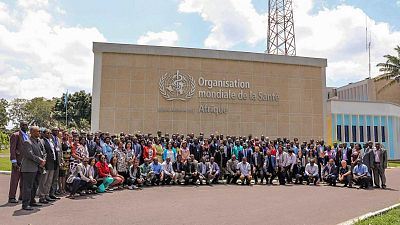 It was the tenth outbreak for its neighbour, but it was the closest that Ebola virus disease had come to Uganda since 2012.

When the first cases were reported in north-eastern Democratic Republic of the Congo (DRC) in August 2018, only 200 km from their shared border, Uganda health authorities braced with concern.

But they had a new tool at hand that would help allay many of their worries. Actually, it was more than a tool – it was the future of public health protection.

It was satellite technology.

There was 800 km of border and more than 1000 health facilities along that shared border. To ramp up their preparation activity, the Ugandan health authorities needed to be strategic. A few years earlier, they would have essentially had to guess where to send preparedness teams.

With information from the DRC on cases and Geographic Information System (GIS)-produced data on population movements between the two countries, the health officials in Kampala could overlay the maps of risk and pinpoint their priorities – 24 health zones.

The Ugandan Ministry of Health was already using the GIS-based active surveillance system that the World Health Organization (WHO) had installed that was letting them know in real time all they needed to know about polio surveillance and general immunization coverage. Instead of diverting those health workers who had been trained to conduct surveillance with a hand phone and a checklist of questions, they trained a large team of Ebola-specific surveillance monitors.

Around 75 active surveillance health workers then fanned out across the 24 predicted hot spots in Uganda marking the location of facilities and asking staff questions to determine how well prepared they were for a possible Ebola case.

They asked many things, including whether the facility had a triage system and whether staff knew the how to collect Ebola specimens, which is hugely critical because it is these front-line health workers who are typically the most vulnerable. In the first round of active surveillance, many people answered no to that question. That instantly told the Ministry officials where they needed to direct additional preparedness training.

When a health worker wisely reported a suspicious case in June 2019, which proved to be Ebola, the Ministry officials checked the surveillance maps on their smart interactive screen with its constantly changing real-time data from and about health facilities, they could easily stay calm. The maps reflected that all health facilities were prepared to the appropriate standard.

Did GIS technology save lives and protect Uganda from an Ebola crisis?

Most likely, says Dr Allan Muruta, the Commissioner of the Public Health Emergency Department with the Uganda Ministry of Health and the Incident Manager for the Ebola outbreak. “Surveillance is at the core of most life-saving interventions, and GIS is at the cutting-edge of surveillance itself. In a resource-constrained country like Uganda, GIS can help you focus and prioritize, leading to timely intervention – saving lives and resources.”

The experience of Uganda and other countries is part of a four-day WHO summit this week in Brazzaville, Congo on the GIS technology and the future of public health delivery.

Organized by the Polio Eradication Programme, which pioneered much of the technology, the summit has brought representatives from all 47 Member States in the WHO African Region to learn about the use of GIS technology for public health decisions and to build up the capability of public health technicians to use it in their countries.

“We know that real-time reporting of quality health information saves lives – and it was for this reason that the regional centre for geographic information systems and innovative technologies was set up,” says Dr Matshidiso Moeti, WHO Regional Director for Africa.

As a powerful technology for early detection and timely response to disease outbreaks, there is growing recognition of GIS as key to achieving national and regional public health goals.

“This is the future,” says Chanda Chikwanda, an epidemiologist in the Zambia National Public Health Institute attending the summit. “It has wide reach. It’s simple. And it helps leave no one behind.”