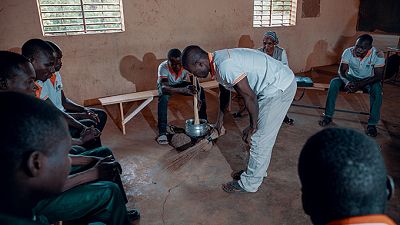 Waimbabie Gnoumou is learning to be a better husband, says his wife, Martine. That’s because he is going to a special school that teaches men exactly that. The Husbands and Future Husbands School in Mamboué, a village in western Burkina Faso, breaks down gender stereotypes and shows men the role they have to play in ending violence and empowering their wives and daughters.

“Ever since he started going to the husbands school, our relationship has improved significantly,” Martine said.

Husbands schools are not new. UNFPA has supported such schools since 2008, starting in Niger. Through these programmes, local facilitators teach men in their communities about the health needs and human rights of women and girls. The lessons are tailored to fit the customs and culture of the community.

The lessons are wide-ranging – they include the importance of girls’ education, the need for pregnant women to receive antenatal care and safe delivery services, and the right of women and girls to live free of violence – but the objective is simple: to help men better understand the challenges facing the women in their homes and communities.

These lessons are critical in the Sahel region of Africa, which has some of the world’s highest rates of preventable maternal death and some of the lowest indicators of girls’ empowerment.

The husbands schools are one small part of a region-wide initiative, Sahel Women’s Empowerment and Demographic Dividend project (SWEDD), which aims to raise the status of women and girls, improving their health, education prospects and future earning potential. The ultimate goal is to help the region achieve a so-called demographic dividend – a boost in development and economic growth that comes from empowering young generations to fulfil their potential, often through education, family planning and other investments.

“Behavioural changes at the male level have had positive impacts at the community level. The challenge for SWEDD is now to move from behavioural change to social norm change,” Issa Sadou, a gender programme officer working for UNFPA in Niger.

The SWEDD project is financed by the World Bank and implemented by the governments of Benin, Burkina Faso, Chad, Côte d’Ivoire, Mali, Mauritania and Niger, with technical support from UNFPA.

In addition to the husbands schools, the project offers vocational trainings for girls as well as initiatives to help girls stay in school, and advocate for their own health and rights.

Every week, the husbands school in Mamboué brings together about 16 men to learn about topics including family planning and household life.

Two project facilitators work with the men to help dispel stereotypes and myths, such as the belief that modern family planning causes sterility.

Mr. Gnoumou regularly attends these discussions, and takes pride in having changed his behaviour.

“I would often fight with my wife and even hit her,” he reflected recently. “When you hit someone, you are aware that what you have done is not right.”

Today, he offers a lot more help around the home, Martine says. He fetches water and wood, and does other household chores. And he hopes to inspire other men, as well.

“Everything we learn, we share with others when we get back to the village,” he said.

He wanted to be present for the birth of their last child – a first, Martine noted.

“Before, there was discord in my household,” she said. “Now, we don’t have as many issues. Ever since he attended this training, we have rekindled the spark.”

Today, more than 1,640 husbands schools have been established in the countries where SWEDD is being implemented.

Download logo
The school for husbands and future husbands teaches men to empower their wives through behavior change. Here, men practice domestic skills to ease the burden on their wives. © UNFPA/Ollivier Girard