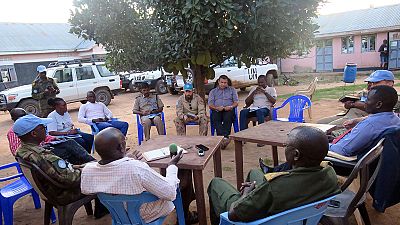 In July this year, the United Nations Mission in South Sudan conducted a civil-military dialogue to reduce tensions in Magwi, Eastern Equatoria. The result so far? A resounding success.

Two months later, a follow-up visit to the area reveals that relations between villagers and the two main military forces have improved significantly, after years of violence. As a result, many Magwi residents have returned home from refugee camps in neighbouring Uganda.

“Civilians in this area are respecting what we agreed on and are no longer moving around with guns and military uniforms,” Gerald Okeny, chief of the Agoro district in Magwi assures the visiting team from the peacekeeping mission.

“Mistrust and tensions between civilians and the military were markedly reduced soon after the resolutions were properly implemented, following the dissemination of the agreement to local communities in the villages,” confirmed Michael Obany Duku, head chief of Owinykibul.

The civil-military dialogue in Magwi came up with several measures to improve relations in the area, including trainings of military officers to professionally perform their task to protect civilians, only allowing soldiers on duty to carry weapons and wear uniforms, and the disarmament of civilians possessing illegal firearms.

The peacekeeping mission, in collaboration with the Inter-Religious Council, has done its part to spread the word by organizing a series of similar dialogues in several places in nearby locations.

The conflict which broke out in December 2013 has claimed many lives in Magwi and sent lots of people fleeing over the border to Uganda. Since then, armed groups have looted properties, and women have frequently been victims of sexual assaults.