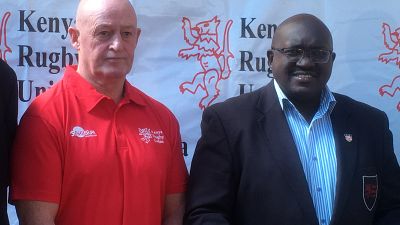 The Kenya Rugby Union (www.KRU.co.ke) has today announced the appointment of New Zealander Paul Feeney as the Kenya Rugby Technical Director effective immediately. In this role, Paul will head the Kenya Shujaa Programme and also support the Simbas, Chipu and Lionesses teams in areas of skills and defence.

Feeney is a World Rugby Level 3 Coach with more than 25 years coaching experience in both sevens and fifteens at the highest levels. He won the 2005 Rugby World Cup 7s with Fiji and has also worked in the All Blacks set up as  the New Zealand’s U20’s Position Specific Coach in 2014 and 2015. He was Head Coach of Auckland ITM Cup for four seasons and won two national sevens championships with them. His last posting was as Assistant Coach of the Stormers for the past three seasons working on skills and attack.

KRU has contracted Paul initially to support up to the Olympics Qualifiers but plans to work with Feeney through to the next Rugby World Cup campaign in 2022. We are delighted that Paul has accepted to work with Kenya Rugby and wish him and the teams the very best in the campaign.

Safari7s Update
Fourteen teams have already confirmed their participation in this years edition, South Africa and Spain being core sides of the World Rugby Sevens Series lead the chasing pack.

Other National sides that have confirmed their participation are Shujaa, Zimbabwe, Uganda and Zambia. Russia Academy and Kenya Morans. The Stanbic Bank National Sevens Circuit Champions KCB will also play.

The tournament is slated for the Mashujaa Day Weekend from the 18th to the 20th of October at the RFUEA Grounds. As it stands, we have Tusker Lager on board who are supporting the tournament with ten Million that will go a long way in ensuring the players and fans at large have a memorable weekend. Bidco Africa and Chukua Selfie are also part of the Shujaa set up as they are the back and front of the shirt sponsors respectively.

The Safari Sevens tickets are available at mtickets.com. Regular advance tickets are Kshs. 600 and at the gate they’ll go for Kshs. 1000 while advance VIP tickets cost Kshs. 1200 and Kshs. 1500 at the gate.