Press Conference of the Ambassador of Cuba 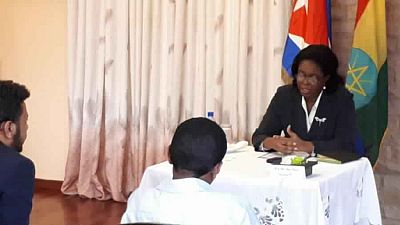 The Cuban Ambassador to Ethiopia, H.E. Mrs. Vilma Thomas adressed local and Cuban journalists in a Press Conference at the Embassy.

The Cuban diplomat explained the transformations experienced by Cuba since the adoption of the new Constitution las April.

She insisted in the aggresive policy of the US towards Cuba in different ways but particularly the sabotage to the Cuban contracts to get oil which put the country in a very critical situation due to the oil shortages.

Cuba will present again in November a Resolution at the UN General Assembly askin the US to put an end the blockade against Cuba.  Ambassador Thomas acknowledged the permanent support received from Africa in this  particular issue.

In the context of the bilateral relations with Ethiopia that will reach 45 years in 2020, she confirmed the willigness of her country to continue supporting Ethiopia in its development path, particularly in the sectors of health, agrhiculture, sports among others.  She highlighted also the invitations sent to the Speaker of the House of Representatives and the Minister of Culture respectively, to visit Cuba. On the case of the Culture Minister, the inivtation is related to the celebration of the 500 anniversary of the city of Havana next November.

The Ambassador also announced that two representatives of the solidarity movement with Cuba in  Ethiopia will attend the 6th Continental Meeting in Solidarity with Cuba to be held in Nigeria from the 23 to 25 September.

Distributed by APO Group on behalf of Embassy of the Republic of Cuba in Ethiopia.
Media files

Download logo
Press Conference of the Ambassador of Cuba