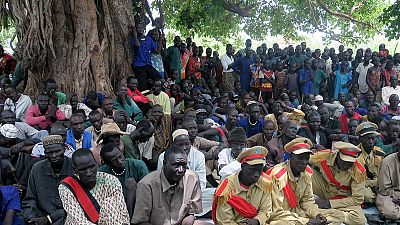 A team from the United Nations Mission in South Sudan has visited the Jalwau County headquarters in Wunlit in the East Tonj region in a bid to put an end to an escalation of violence, including cattle raiding and revenge killings, between the Thiik, Akok and Jalwau communities living in the area.

The latest and particularly vicious wave of attacks has reportedly claimed at least 49 lives, with another 44 persons being wounded and more than 3,000 people having been displaced.

“We, the women, are the most affected by this conflict because our sons and our husbands are the ones that are dying all the time when there is an attack,” local woman Adut Majok told the visiting delegation, which also included East Tonj Governor Matthew Mathiang Magoodit.

An eyewitness told the visiting delegation about horrific scenes of killings of women, children and the elderly by arm-touting youth groups that reportedly invaded their villages in a series of cattle raids. Only the Jalwau county commissioner urging the young men of his community not to avenge the attacks stopped, at least temporarily, the conflict from escalating further.

“I thank the peacekeepers for their support and for bringing our governor here today to talk to our youth and convince them to stop fighting, Commissioner Victor Akucbeny Mading said, amidst applause from the hundreds of citizens that had come to take part in the dialogue initiated by the UN mission’s Field Office in Kuajok.

Speaking on behalf of the peacekeeping mission, Civil Affairs Officer Abimbola Olubukunola Aina, expressed her bewilderment when faced with the continuous vicious circle of intercommunal fighting that has been going on in the area for longer than anyone can remember.

“When South Sudan got independence, it was also to ensure that there would be a peaceful future for the young people in this country. We don’t want the youth to continue to lose their lives. We are appealing to you, young people, to end the violence,” she said. “South Sudanese are one people irrespective of what ethnic group you belong to, and this is the time for peace. This is the time to shake hands and live together.”

On this particular occasion, however, a session of intercommunal handshaking was not to be, as representatives of the Thiik and Akok communities could not attend the Wunlit meeting. In fact, for reported security reasons, the three feuding groups are yet to sit together under the same mango tree to discuss their differences.

If local authorities and the peacekeeping mission can have it their way, people from the three ethnic groups will eventually meet for face-to-face talks. Plans for making this happen are under way.

The root causes of the longstanding conflict in this part of the country seem to be unknown, but unconfirmed reports claim that an operation to forcefully disarm civilians have exacerbated the situation as cattle owners want to use guns to protect their animals.

Governor Magoodit, who personally visited the wounded from the recent attacks, called on his people to quit the path of violence and gather where the light of peace and development is shining.

“I want to tell you all to stop killing one another. All of you are one community,” he concluded.