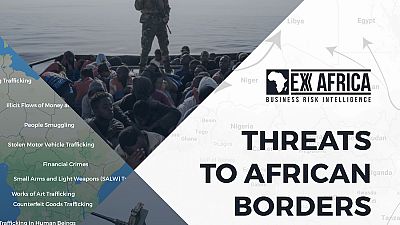 With 54 countries and a continental coastline of 30,500 km that spans the Mediterranean sea in the north, the Suez Canal and the Red Sea in the northeast, the Indian Ocean in the east, and the Atlantic Ocean in the west, Africa’s borders are both numerous and vulnerable.

EXX Africa delves into the primary threat actors taking advantage of these vulnerabilities to further their own objectives across the continent. The report will be submitted the United Nations General Assembly this month to raise awareness of the continent’s border threats.

While there is occasional overlap among such actors given the nature of illicit activities, this series explores the threats posed by (a) illegal migrants, (b) criminal organisations, and © militant groups. EXX Africa also looks at the various local, regional, and international measures that have been implemented to mitigate each one of these threats, with a focus on Western interventions.

In order for Europe, the US, and other regions to stem the smuggling of illegal substances and people, as well as other forms of transnational flows, a more coherent and collaborative approach is required which is addressed in EXX Africa’s latest report.

Distributed by APO Group on behalf of EXX Africa.

About EXX Africa:
EXX Africa (www.EXXAfrica.com) is a specialist intelligence firm providing analysis and forecasts on political, security, and economic risk across all African countries. The company was founded in 2015 and has since become a leading risk advisory and consultancy with a broad network of clients ranging from DFIs, banks, traders, corporates, and insurers, to governments and military forces worldwide.