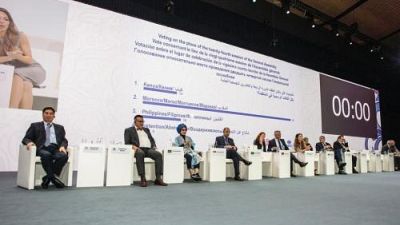 The Kingdom of Morocco has been officially chosen as the host of the 24th Session of the World Tourism Organization (UNWTO), to be held in 2021.

At the conclusion of the 23rd General Assembly in St Petersburg, Member States of the United Nations specialized agency for tourism, were asked to choose between Morocco, Kenya and the Philippines. All three Member States had presented their candidatures over the preceding days, highlighting their commitment to accessibility and sustainability and for using tourism as a driver for job creation and economic growth for all.

The 24th Session of the General Assembly will be held in the city of Marrakesh in 2021, with the exact dates to be confirmed.

UNWTO General-Secretary Zurab Pololikashvili said: “I offer my warmest congratulations to Morocco. They are a long-standing ally of UNWTO and at this General Assembly they clearly demonstrated how the Kingdom has embraced tourism as a driver of positive change over the past few decades. Morocco also showed it has the infrastructure and the commitment necessary to host the most important high-level even for the global tourism sector. At the same time, I thank both Kenya and the Philippines for their candidatures. Both presented exceptionally strong cases.”

For the first time at a UNWTO General Assembly, Member States used an anonymous electronic voting system, with one vote per Member State. This switch away from paper ballots brings UNWTO in line with other United Nations agencies, further emphasising the Organization’s firm commitment to becoming an integral part of the wider UN system.