Every summer the West African nation of Niger endures torrential rains which can destroy hundreds of households and trigger cholera outbreaks, often leading to major human and material losses across the country.

This year, in fact, more than 200,000 people are at risk of being displaced during the rainy season due to overflowing rivers and landslides. Close to 50,000 of these potential victims reside in Dosso, 45,000 in Niger’s capital city, Niamey, and 38,000 more in Maradi.

These past two months alone, floods killed 45 people, injured 55 and left more than 66,000 displaced, most notably in the regions of Maradi, Agadez and Zinder. Authorities asked Niamey residents to take the necessary precautions to prepare for further damage after the Niger River overflowed and urged residents to leave the flood-prone areas.

The International Organization for Migration (IOM) and its partners are able to assist populations affected by natural disasters threatening Niger through their humanitarian emergency assistance.

Together with UNICEF and Niger’s General Directorate of Civil Protection (DGPC), IOM this week has distributed over 500 non-food item (NFI) kits, including 250 tarpaulins, to households affected by floods in Dosso (285), Tillabéri (77) and Maradi (150).

This assistance followed requests from the Ministry of Humanitarian Action and Disaster Management (MAHGC) in Niger, the Shelter and NFI Working Group urgently convened and assessed the risk levels, needs and costs, and responded quickly and appropriately.

“It was about three in the morning when a neighbor woke us, telling us to get up and leave. People were being swept away by the floods,” recalled Issaka Amadou, one of the residents of the Kirkisoye neighborhood in Niamey. “The authorities eventually managed to contain the floods, but we had to temporarily move to the school nearby.”

Along with houses, the heavy rains have affected various crops and hydro-agricultural developments along the banks of the Niger River where most of Niamey’s inhabitants reside. However, despite the warnings, many residents are reluctant to leave their homes.

IOM has been active in emergency responses in Niger since 2013, providing shelter and NFI kits to vulnerable displaced communities. IOM Niger also facilitates, as co-lead together with the Ministry of Humanitarian Action and Disaster Management (MAHGC), the coordination of the Shelter and NFI Working Group.

“No one should be forced to leave their home or live in constant fear of their home being destroyed,” said Barbara Rijks, IOM’s Chief of Mission in Niger. “Along with national authorities, we are committed to responding to this crisis in the most efficient manner and providing relief to vulnerable communities in need,” she added. 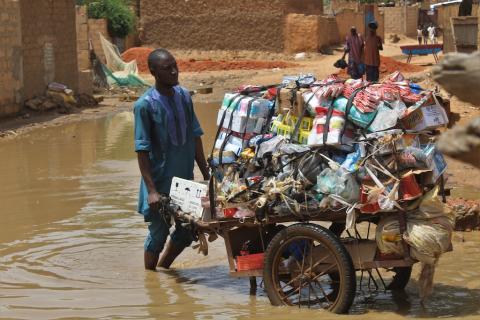