The International Organization for Migration (IOM) supported 31 Tunisian students and university graduates with concrete opportunities to build up their skills and increase their chances of finding an adequate job, or to create their own opportunities through a 20-month project linking Belgium and Tunisia.

Launched in March 2018 and running through October 2019, the project Enhancing Tunisian Youth Employability through Professional Internships in Belgian Companies, backed with the financial support of the Government of Belgium through the Immigration Office, has sought to address the dual challenge of the high rate of unemployment among young Tunisians and the persistent risk of youth resorting to dangerous, irregular migration.

“IOM in Belgium has developed several initiatives exploring new legal migration channels to Belgium, including the present project,” said Laura Palatini, Chief of Mission for IOM Belgium and Luxembourg. “The creation of alternative pathways for third country nationals to Belgium, and to the EU in general, is critical not only as a way to decrease the flows of risky, irregular migration, but also as a solution to labour and skills' shortages across the labour markets of EU Member States,” she added.

Through IOM support and the creation of a solid network of public organizations and private enterprises in both Belgium and Tunisia, the young people landed six-month internships at 12 different companies in Belgium. All project participants have completed their six-month internship in Belgium and are now back in Tunisia, where 80 per cent of them have already found a job in a local enterprise.

The remaining participants will receive five months of support to find employment in an enterprise matching offers currently available in the Tunisian labour market as well as through additional trainings to further enhance their professional skills.

“It is very appreciated in Tunisia when one has an experience abroad. This is already a positive point. This experience also taught me the sense of responsibility and to be more independent and have more confidence in my choice,” said Sarah Ben Saïd, an intern at ‘myGO’ Belgium.

On Thursday (12/09), some 40 stakeholders gathered in Brussels at the closing session of the project where the key results and lessons learned were highlighted, in the presence of H.E. Ridha Ben Mosbah, Ambassador of Tunisia to the Kingdom of Belgium; Katelijne Bergans, Deputy Director General of the Belgian Immigration Office; and IOM Tunisia. Other participants represented the Belgian Government, the European Commission, the Tunisian Consulate in Brussels, Fedasil, partner companies, civil society organizations, research centres and universities, public employment agencies, the private sector, and chambers of commerce.

According to the National Institute of Statistics (INS) Survey on Population and Employment for the second quarter of 2016, the high rate of unemployment in Tunisia has been among the main problems addressed by all the governments in charge since the revolution of 2010 and 2011, with an overall rate of 15.6 per cent for the second quarter of 2016 and an even more problematic 30.5 per cent rate among higher education graduates only.

This situation remains a big challenge and contributes to internal instability, as well as representing a strong driving factor towards regular and irregular migration towards Europe.

The National Development Plan for 2016-2020 addresses the issue through specific provisions to improve the education system and better link it to possibilities of employment. It also includes support to investment and micro enterprises as well as strengthening relations with Tunisians residing abroad.

For more information on this project, please click here and watch this video. 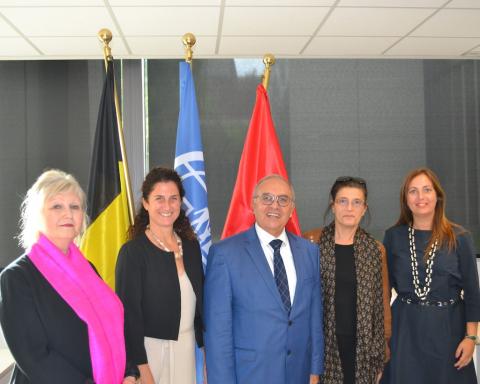