Appeal launched for Humanitarian Response to Cyclone Devastation in Mozambique

The HRP – which comes six months after Cyclone Idai made landfall and was shortly followed by Cyclone Kenneth – targets 2 million of the 2.5 million people who need life-saving assistance, to deal with challenges including food insecurity, inadequate shelter, lack of health services, poor infrastructure, and recovery from drought. If funded the appeal will cover identified priority needs through May 2020.

The International Organization for Migration (IOM) portion of the HRP request is for USD 33.7 million to assist over 877,000 cyclone-affected individuals and expand IOM programming in Shelter, Health, Camp Coordination and Camp Management (CCCM), Protection, and Coordination, all areas essential to the post-cyclone recovery process.

More than 500,000 people are still living in houses that were severely damaged by the cyclones (over 280,000 homes were damaged or destroyed). This is especially concerning, as the onset of the rainy season is expected next month.

“Following Cyclones Idai and Kenneth, critical humanitarian needs continue across the country – especially for health, shelter, and infrastructure repair. Many families remain living in tents and damaged homes that may not stand up to the rainy season, let alone the next cyclone season,” said IOM Mozambique Chief of Mission Katharina Schnoering.

“Families who recently moved to resettlement sites need support to build stable shelters, access health and education services, and establish their livelihoods. Without funding, families will suffer ongoing exposure to a number of risks to their health and safety.”

Edwina, a resident of a resettlement site in Sofala Province, lost her home and entire neighbourhood due to flooding in Nhamatanda district and cannot return. “As a widow and mother of four, I feel very vulnerable. I need a better house because I’m scared that my tent may fall in the coming days due to heavy rains.”

She continued, “I also need materials to make and sell doughnuts at the market as I did before the cyclone. I need cake flour, cooking oil, sugar, yeast. This would really make me independent again.

Over 500,000 individuals have received various shelter and essential household items from IOM in Sofala, Manica and Cabo Delgado provinces and humanitarian partners. Additional shelter material is needed to repair houses and reinforce tents before the raining season; according to the HRP, 620,000 individuals need shelter and NFI support.

Download logo
Tratara resettlement site in Cabo Delgado, hosting nearly 150 families who were displaced following Cyclone Kenneth. Site improvements are required to mitigate risks ahead of the next rainy and cyclone season 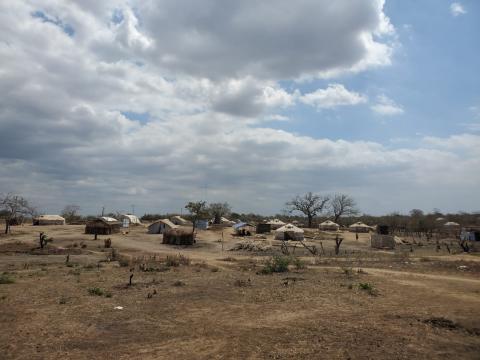