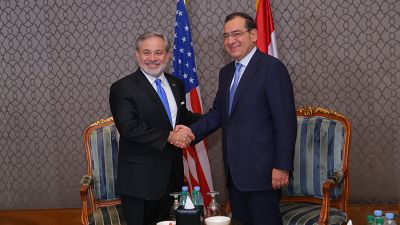 The Strategic Energy Dialogue between the two countries focuses on oil and gas development, as well as cooperation on electricity and energy technologies. The launch of the Dialogue was initiated through the recent meeting between President El Sisi and President Trump, and furthered by U.S. Secretary of Energy Rick Perry’s bilateral engagements during his recent visit to Egypt.

Through this Dialogue, the U.S. and Egypt will cooperate on a number of shared areas of interest across the energy sector, including but not limited to enhancing energy trade, clean coal technology, carbon capture utilization and storage, bio-economy, energy efficiency and renewable energy, green building technologies, smart grids and energy capacity building.

The launch of this Dialogue also underscores the continued U.S. support for the East Mediterranean Gas Forum (EMGF) and Egypt’s role as a regional energy hub for natural gas and electricity.  In this historic time of Egypt’s energy development, the United States government and the United States private sector stand ready to cooperate with Egypt to enhance its energy security and that of the region.