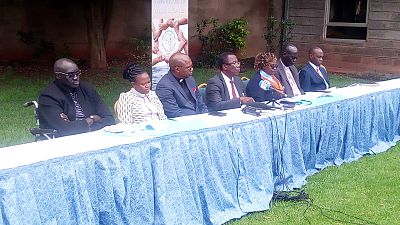 One year on from the signing of a peace agreement in South Sudan, thousands of African faith leaders represented by Africa’s major faith-based coalitions have called on East African leaders to urge President Salva Kiir and Opposition Leader Dr. Riek Machar to implement the South Sudanese peace agreement in good faith.

In a statement (https://bit.ly/2ktxzyV) headed “Revive faith in the peace process in South Sudan”, the religious leaders say the South Sudanese leadership have a moral obligation to their citizens to end the violence and ensure continued progress towards peace, stability and justice. The statement, read during the All African Conference of Churches meeting currently being held in Nairobi, added that East African leaders must encourage the South Sudanese leadership toward a more lasting peace, particularly today, the one-year anniversary of the signing of a peace agreement ending a civil war that has ravaged Africa’s youngest nation since 2013.

“The regional leaders, as South Sudan’s good neighbours, must now speak the truth to the leaders of South Sudan, on behalf of the millions of voiceless South Sudanese men, women and children who bear the brunt of the conflict,” the statement says.

Signatories to the statement include African Council of Religious Leaders – Religions for Peace (ACRL-RP), the Council of Anglican Provinces of Africa (CAPA), the All Africa Conference of Churches (AACC), with support from the Association of Member Episcopal Conferences in East Africa (AMECEA) and the African Forum for Muslim Councils.

The statement appeals to Uganda’s President Yoweri Museveni and Kenya’s President Uhuru Kenyatta as South Sudan’s neighbours, South Africa’s President Cyril Ramaphosa as chair of the AU High-Level Ad-Hoc Committee for South Sudan, and Ethiopia’s Prime Minister Abiy Ahmed as IGAD chair, to urge President Kiir and Dr. Machar to implement the peace agreement in good faith. They also call on the regional leaders to urge President Kiir to urgently release the balance of the USD 100 million pledged in May this year as a demonstration of genuine commitment to the peace process and to advance critical pre-transitional tasks that remain outstanding.

“We the religious leaders of Africa, by the grace of the Almighty God and driven by the teachings of love and peace, and the African principle of Ubuntu which calls on every person to be one another’s keeper, stand in solidarity with our brothers and sisters, the people of South Sudan on this historic day,” the statement reads. “We prayerfully look forward to a peaceful, united and just South Sudan that is founded on the values of peace and love for one another.”

Distributed by APO Group on behalf of African Council of Religious Leaders – Religions for Peace (ACRL-RfP).

About ACRL-RfP:
The African Council of Religious Leaders — Religions for Peace (ACRL—RfP) (http://ACRL-RfP.org) is the largest and most representative multi-religious platform in Africa. ACRL—RfP's Vision is Sustainable peace and Justice in Africa. Our mission is mobilizing religious leaders and their communities to build peaceful, just, hopeful and harmonious societies in Africa. ACRL-RfP's strategic areas include Peace and Justice, Democracy and Governance, Sustainable development and sustaining the earth and institutional strengthening.