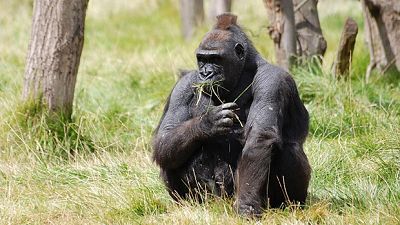 Kwita Izina is an annual event which this year was held in Kinigi, near Rwanda’s borders with the Democratic Republic of the Congo and Uganda. At the ceremony, baby mountain gorillas are named by dignitaries, celebrities and leaders in conservation.

The event's main goal is to bring national and international attention to the importance of protecting mountain gorillas.

Patricia Scotland named her gorilla ‘Nazarian’ meaning ‘the one who loves and initiates peace’, before telling the crowd she hoped her baby gorilla would be the “peaceful one who brings love and harmony to the gorilla community”. She went on to congratulate Rwanda on its “fantastic” conservation efforts and for hosting next year’s Commonwealth Heads of Government meeting in Kigali.

Kwita Izina, literally meaning ‘to give a name’, has been running for 14 years. During this time the gorilla population in the north’s Volcanoes National Park and Virunga Mountains has increased by 26.3 per cent. The ceremony does not feature real gorillas but sees dancing, music and speeches – including that of Rwanda President Paul Kagame who named twin gorillas in the ceremony’s early years. He jokingly told the crowd that the twins are “doing well”, that he has “paid their school fees” and often chats with them on WhatsApp as “the wifi in the area is very good”.

Although the main threat to gorillas in this region is poaching, climate change is also a huge threat to the great apes.

Changes in rainfall patterns and temperatures can affect the gorillas' food supply, cause thermal stress, increase the chances of losing habitat to forest fires, and can enable the emergence of new diseases from which the gorillas have little or no immunity.

The Secretary-General therefore took the opportunity to speak extensively about the Commonwealth Climate Finance Access Hub during her trip to Rwanda. The programme is designed to help member countries untangle red tape around climate financing, and make successful applications to the international funds that address the effects of climate change in their country. She also highlighted the value of the ‘Youth Entrepreneurship For The Green and Blue Economy’ toolkit which provides practical advice to help governments respond to opportunities and challenges facing the environment, young people and the economy.