Renewed Hope - The Story of Faraa 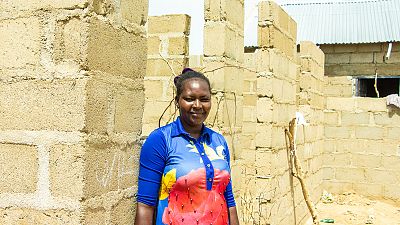 Faraa* fled her community in the wake of an attack by non-state armed groups in north-east Nigeria six years ago. Armed men burned down several houses that night, including hers, and took the lives of men, women and children.

Fleeing a trail of devastation in her home in Michika, she arrived in a host community in Yola, the capital of Adamawa State, in search of safety and a new home for herself and her family.

In Yola, Faraa met one of the International Organization for Migration’s (IOM) Mental Health and Psychosocial Support (MHPSS) workers in October 2015. Following her experiences during conflict in the years prior, she showed signs of distress and indicators of depression.

The IOM team provided psychosocial support and referred her to a mental health facility in Yola where she was treated for severe depression. Since then, Faraa has been receiving medication as well as psychoeducation, which ensures that she and her family are aware of the conditions and symptoms of the disorder and acknowledge the importance of taking her medication.

In 2017, as her condition began to improve, she was selected by IOM to receive integrated small-scale livelihood support including a machine to make pasta and raw materials to complement her recovery process.

Now in its tenth year, the ongoing conflict between non-state armed groups and Nigerian armed forces continues to uproot the lives of tens of thousands of civilians. Since 2019, a spike in violence and military counter-operations have displaced some 136,000 people in Adamawa, Borno and Yobe States. In Adamawa alone, over 190,534 individuals like Faraa are currently displaced from their homes.

“The crisis in the Lake Chad Region is far from over,” said Vincent Houver, IOM Deputy Director for Operations and Emergencies during a visit to Nigeria in July 2019. “The humanitarian community cannot spare any effort at this time.”

An Eye for Business

With the proceeds from her business, Faraa can provide for her four children, three of whom are enrolled in a nearby private nursery and primary school.

“I did not know how to make pasta before, but I learned in one day,” she said to IOM staff on a recent home visit to assess her progress.

Standing in front of a brick structure, she explains that she has saved enough money to buy a piece of land where she is now building a house for her family.

Faraa is now venturing into other business opportunities. Just recently, she started selling pasta and chin-chin, a fried snack popular in West Africa, at a private primary school within the community.

Today, Faraa feels safe and welcome in the town she escaped to six years ago. Much of her past is a blur, but as she ponders on her future, she seems calm and optimistic.

“I never thought I would be as happy as I am now,” she says, as she hands out samples of fresh chin-chin. Her customers grab a piece and quickly ask for another. Faraa chuckles, her eyes beaming with pride.

*Name has been changed to protect the identity of the beneficiary.

IOM’s MHPSS activities in northeast Nigeria are funded by SIDA, USAID, the Government of Italy and the Federal Republic of Germany.

Download logo
Faraa stands in front of the house she has started building with proceeds from her pasta business, a few meters away from the host community that welcomed her in Yola