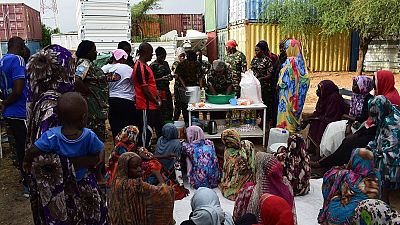 On 29 August 2019, more than 100 women from Khor Abeche IDPs camp in South Darfur attended a training course on preparing “Maandazi” (a type of fried bread made of wheat). The initiative is part of capacity building and income generating projects designed by UNAMID women soldiers at Khor Abeche Team site to support the local women in the area.

The aim of the project is to impart entrepreneurship skills to women and young girls to enable them to transition from aid dependency to self-sustainability.

Speaking to the local women who participated in the “Maandazi” training, Lieutenant Prisca Mwandanji, a member of UNAMID Tanzanian Contingent based in Khor Abeche, urged the women to make every effort to expand their attained skills in order to improve their standard of living. “We firmly believe that regular production of this type of fried bread will not only be beneficial to you and your families but to your community as a whole,” Lieutenant Mwandanji added.

In their response, the local women lauded UNAMID efforts, especially the Tanzanian Contingent who have devoted some of their time to improving the standard of living for the community it serves in Khor Abeche through initiating such projects that transform the welfare of these families thereby safeguarding sustainable sources of income.

“Skills acquired from this training shall not go to waste. We assure you that our families will benefit much from these skills. We anticipate that customers will scramble in large number for our “Maandazi” earning us the much-desired funds to reasonably sustain our families,” stated Fatma Mohamed, the leader of the Women’s Union in Khor Abeche IDP Camp.

“Maandazi” is famous across East Africa, especially the Swahili coast of Tanzania and Kenya, being made for commercial as well as family uses.