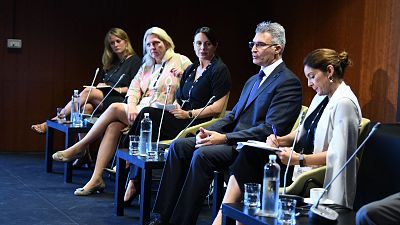 The narration on migration should change. It is time for the European Union to see African countries as important trade partners. This was remarked by Minister for Foreign Affairs and Trade Promotion Carmelo Abela while addressing a panel discussion held as part of the 14th edition of the annual Bled Strategic Forum (BSF) in Slovenia. Minister Abela emphasised that by investing in countries of origin the EU will be leading to addressing the root causes of irregular migration as it will be providing new opportunities for the younger generations in their own countries.

Under the theme ‘(Re)sources of (In)stability’, this year’s BSF took place in Bled, Slovenia and was dedicated to discussing the role of resources regarding peace and security, sustainable development and economic progress.

In his remarks, Minister for Foreign Affairs and Trade Promotion Carmelo Abela, noted how migration has been a long-standing phenomenon and said that this is a global issue and the international community should discuss how to address and manage migration.

“Malta, like other Mediterranean countries, is at the frontline in dealing with migration through the Mediterranean route and the priority remains saving lives as well as full respect for international laws. Nonetheless the issue of migration needs to be holistically addressed, both from a European but also global perspective” said Hon. Abela. He added that Malta would also like to see more responsibility sharing and that EU member states should unite to be part of the solution together. He noted that structures such as EASO and others should be strengthened and that they are complemented by the political will to find tangible possibilities.

The Bled Strategic Forum, which is organised by the Ministry of Foreign Affairs of Slovenia, is an international conference which brings together a diverse set of participants, including Heads of State and Government, ministers, diplomats, businesspeople, scholars and experts, youth, and media from around the world. The Forum focuses on engaging the participants in discussions about, as well as urging them to seek out-of-the-box solutions for, the compelling regional and global challenges.

On the side-lines of the Forum, Minister Abela had the opportunity to have a number of bilateral including with the Minister for Foreign Affairs of Finland, H.E. Pekka Haavisto and with H.E. Mr. Eyal Sela, Israeli Ambassador to Malta. Minister Carmelo Abela also met with the Scottish Minister for Europe, Migration and International Development Ben Macpherson.