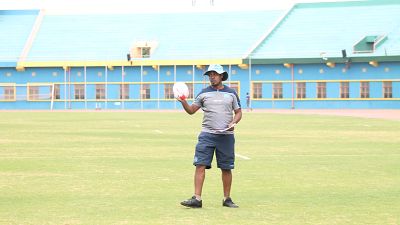 I am really happy the boys nailed it, the pressure was on the full minutes nonstop, I’m very happy I don’t know how to express it. We really needed this trophy the club have not won the league tittle 6 years ago. ‘’ John Livingstone Muhire in post match interview.

He further noted that,’’ this is a step in the right direction for the team, now we are looking forward to our next challenge , which will be to defend the title next season. Winning today means a lot for the boys specifically, in terms of confidence – building and to work as a team to achieve such triumph.

It was an agonizing day according to Mucungura Diego, the Thousand Hills captain as his side failed to reproduce the sort of form that saw them dominate the Kigali League as well as their semi – final play – off against Muhanga Thunders.

Beside the trophy , Lions de Fer walked away with 150,000RWf prize money and their flyhalf Iradukunda Ombeni became Most Valuable Player of the Rwanda Rugby National League 2019 while Thousand Hills got 100,000RWf.