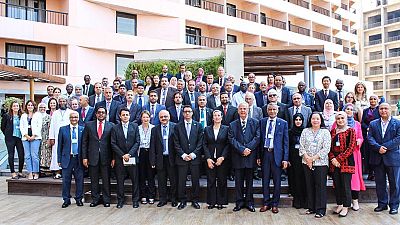 The Food and Agriculture Organization of the United Nations today hosted a workshop in Cairo to enhance the technical capacity to climate change adaptation in the Near East and North Africa (NENA) countries’ agriculture sector.

Around 100 participants from 14 member countries in the region, delegates from partner entities and regional media attended the opening session, in which Pablo Vieira, Global Director of NDC Partnership,  Mohamed Abd-Elaty, Minister if Water resources and irrigation, and Saad Nassar, Advisor of the Minister of Agriculture and Land Reclamation delivered statements, in addition to the opening remarks by Abdessalam OuldAhmed, Assistant Director-General and Regional Representative for the NENA region. Yasmine Fouad, Minister of Environment in Egypt, also delivered a statement highlighting the importance of the climate change, salinity and biodiversity agendas in Egypt.

Throughout a three days program, the workshop is offering a knowledge-sharing platform through bringing in all stakeholders together towards identifying innovative and effective interventions to address the impacts of climate change across the region, in fulfilment of the Paris Agreement agenda that was signed in 2015 by developed and developing countries; in a commitment to addressing climate change issues.

The workshop will provide an opportunity to enhance partnership and mobilise resources for implementing the Nationally Determined Contributions (NDCs) commitments in the region.

Adapting to a global threat

Climate change is widely recognised as a global threat – to humans, a wide range of species and the environment. The importance of climate change adaptation has been highlighted at a global level, including under the Paris Agreement and the Sustainable Development Goals (SDGs).

In his opening statement, Abdessalam OuldAhmed, Assistant Director-General and Regional Representative for the NENA region, explained how FAO supports its member states to adapt and mitigate climate change, working in close collaboration with UNFCCC and other partners. “FAO participates in the NDC Partnership’s work as an implementing partner through its country, sub-regional and regional offices, with the support provided by a dedicated team in its Headquarters in Rome, to ensure that the importance of the agricultural sectors is reflected in countries’ NDC implementation strategies and plans”, he added.

Besides, FAO facilitates the Thematic Working Group (TWG) on Agriculture, Food Security and Land Use under the umbrella of the NDC Partnership. The TWG aims at fostering countries’ climate change action in the agricultural sectors through knowledge exchange and peer-to-peer learning activities.

The most vulnerable region to Climatic change

According to the global and regional FAO assessments, NENA is the most vulnerable region to climatic change, in the world. The Region is predicted to become even hotter and dryer than ever. Sea level rise of about 0.1 to 0.3 meters is also expected by the year 2050, augmenting seawater intrusion to coastal groundwater resources. FAO’s recent study on the impact of climate change on the different farming systems and the livelihoods in the Region showed that a large segment of the region’s population, particularly those depending on small scale rain-fed agriculture, will be at great risk. The report indicated that there is “high confidence” that many oases of North Africa and the Arabian Peninsula are vulnerable to climate change. Consequently, the anticipated impacts of climate change will pose additional stress on food production systems under pressure to satisfy the food needs of rapidly growing populations.

Between 1998 and 2012, the drought that hit the eastern Mediterranean (Jordan, Lebanon, Palestine and Syria was the worst in the past nine centuries. The recent drought in the winter of 2015-16 affected all North African countries, causing a significant reduction in grain production in Algeria, Morocco and Tunisia.

FAO, the Paris Agreement and NDC

The Paris Agreement, which was signed in 2015 by 196 Parties, aimed at limiting global warming in an attempt to adapt to the impacts of climate change, and amplify climate resilience and low greenhouse gas emissions development, in a manner that does not threaten food production in particular. The agreement objectives rely on the Nationally Determined Contributions (NDCs) those signing parties submitted to the United Nations Framework Convention on Climate Change (UNFCCC).

About 90 percent of the countries' NDCs refer to FAO analysis of the agriculture sectors in its strategies’ implementation. The FAO publication, ‘The agricultural sectors in nationally determined contributions (NDCs): Priority areas for international support', identifies areas of intervention that apply to all areas of FAO’s work on climate change. Its sequel, Turning Nationally Determined Contributions into action, outlines the related support FAO has to offer.