The United Nations Food and Agriculture Organization (FAO) with support from the International Organization for Migration (IOM) this week began distributing seeds and farming tools to approximately 11,000 families affected by Cyclone Idai.

“I lost my house and my farm in the floods. My two children and I were trapped by the water. A man came by with a canoe and he rescued us. We suffered a lot,” said Domingas, 23, who tills a small plot of land with a shovel and hoe to feed her children.

Cyclone Idai which swept through the region nearly six months ago displacing hundreds of thousands of people, deprived her of even that meagre livelihood and fuelled widespread food insecurity. She now lives at Ndeja resettlement centre in Sofala province along with her husband, brothers and children.

“I used to grow maize and lettuce to sell in the local market. We are still in need but now with these seeds and tools I will plant, grow my own food, and sell the surplus to support my family.”

The vulnerable small hold farming households that will receive assistance include all the families (over 50,000 individuals) in nearly 50 of the 68 resettlement sites established after Cyclone Idai, which made landfall in Mozambique on March 14. The distributions will be in the provinces of Manica and Sofala.

The packages include seeds: tomato, onion, cabbage, okra and couve (kale), along with tools (two hoes, one machete and one watering can). These diversified crops will draw residual moisture from the soil in lowland areas, and their harvest will contribute to food security and nutrition for households and communities. With these early maturing vegetables, crops can be harvested beginning 90 days after planting. After distribution of vegetable seeds, FAO District Services of Economic Activities (SDAE) technicians will continue support with technical assistance to growers.

“Cyclone Idai caused immense loss including homes, crops and arable land, which is devastating for families that depend on subsistence farming,” said FAO Representative in Mozambique Olman Serrano. “This distribution of seeds and farming tools will assist these affected families to jumpstart their agricultural activities in their effort to rebuild their livelihoods.”

“Displaced families, many of whom have moved two or more times since the cyclone, are now in resettlement sites and are taking steps towards recovery,” said IOM Mozambique Chief of Mission Katharina Schnöring. “This seed distribution will speed their recovery process. We commend the leadership of the Government of Mozambique and collaboration with FAO to assist families to move forward.”

More than 83,000 people (over 16,700 households) who were displaced and could not return home are currently living in 68 different resettlement sites, established by the Government of Mozambique. According to the latest IOM Displacement Tracking Matrix (DTM) Multi-Sectoral Location Assessment, families at the majority of resettlement sites reported food as their greatest need, followed by water, education, shelter, and health services.

For this seed and tools distribution, FAO and humanitarian partners are beginning distributions in areas where populations are more vulnerable, and in locations where the Government of Mozambique has already allocated plots of land for families displaced by Cyclone Idai, to be used for machambas, small holder planting.

FAO’s overall programme of seed and tools distribution includes vegetable seed distribution in four provinces (Manica, Sofala, Zambezia and Tete) with a total of 76,000 household beneficiaries (382,500 individuals), including approximately 11,000 families in resettlement sites. The FAO emergency response programme is funded by the World Bank, the National Sustainable Development Fund (FNDS) of Mozambique, the Office of US Foreign Disaster Assistance (OFDA) and the UN Central Emergency Response Fund (CERF). FAO has already distributed maize and bean seeds to more than 18,000 households in Manica and Sofala. In this second phase, FAO is distributing additional seeds and tools and reaching Tete and Zambezia provinces.

Families who experienced crop damage and loss of food, seed reserves, and livestock are prioritized in the distributions, with additional priorities for woman-headed households, the elderly and other disadvantaged groups. Selection of beneficiaries is conducted in collaboration with local government, including the Provincial Directorates of Agriculture (DPASA), relief committees, community leaders and local NGOs.

Download logo
The FAO, supported by IOM, is distributing seeds and farming tools to approximately 11,000 families affected by Cyclone Idai in Mozambique 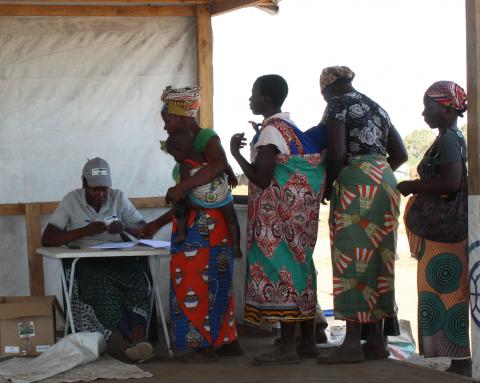