Forum on sustainable urbanization kicks off in Addis Ababa 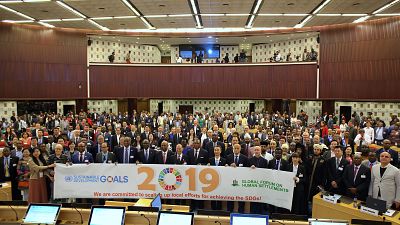 Over 500 participants from 52 countries across the globe have converged in Addis Ababa for the 14th Global Forum on Human Settlements (GFHS 2019), which kicked off on Thursday at the United Nations Conference Centre.

The two-day event is taking place under the theme “Sustainable Development of Cities and Human Settlements in the Digital Era.”

In a welcome speech delivered on behalf of the Executive Secretary of the United Nations Economic Commission for Africa (ECA) by Oliver Chinganya, Director of the Africa Centre for Statistics, it was cautioned that human settlement must be thought of in terms of quality of life and levels of satisfaction of basic needs.

Mr. Chinganya deplored the fact that an estimated 60-70% of urban households live in slums and close to 90% of the population in Africa live in informal housing.

“This is a large share of the population that live in overcrowded, unhealthy and risky environments,” he said, emphasizing that “It lacks the basic services and social protections that many of us here take for granted – such as clean and safe water, a decent toilet, title deeds or rental agreements, among others.”

Mr. Chinganya said discussions on smart cities and digital citizenry must be done with the understanding that “only a third of Africans are on the internet,” and that “the digital infrastructures are far from the world’s best in terms of speed, volume, and reliability.”

The meeting is co-organized by the Global Forum on Human Settlements (GFHS), ECA, the International Telecommunication Union (ITU) and the World Urban Campaign (WUC).

It was officially opened by Ethiopia’s Minister of Water, Irrigation and Energy – Seleshi Bekele – who stated that the use of modern and digital technologies “offers tremendous opportunities to improve efficiency.”

He cited his country’s use of digital applications and systems in the utility sector (water and electricity) as one of the many areas in which the country is trying to upscale the use of innovative technology to transform the quality of life in cities and in the nation at large.

The GFHS is taking place in Africa for the first time, as noted by its Secretary-General, Lu Haifeng, who pledged that “GFHS would actively promote all-round economic and cultural exchanges and cooperation between Africa and other regions including the Belt and Road Initiative, thus contributing to sustainable development in the region.”

The Forum will explore how to harness the huge opportunities arising from the digital revolution to upgrade the planning, construction, and management of cities and human settlements, and make them greener, smarter and more sustainable.