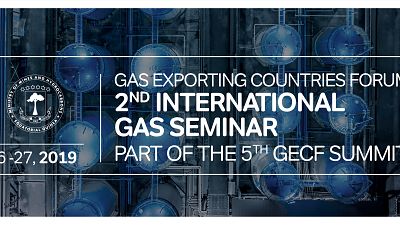 Egyptian Minister of Petroleum, Tarek El-Molla, has confirmed his attendance to the 5th GECF Summit of Heads of State and Government and seminar be held in Malabo, Equatorial Guinea from November 26 – 27 2019.

Egypt is poised to become a regional liquefied natural gas (LNG) trading hub thanks to booming natural gas production from recent discoveries, existing LNG infrastructure and strategic agreements it is seeking with eastern Mediterranean countries to import gas for processing and re-export.

Egypt is enjoying a natural gas boom, in part, due to the rapid development of its giant offshore Zohr gas field, discovered in 2015. Zohr’s output expanded six-fold in its first nine months of operation, reaching 2 billion cubic feet per day in September. The field’s operator, Italian oil major Eni, anticipates the Zohr field reaching its plateau production in excess of 2.7 billion cubic feet per day by the end of 2019.

In a landmark move for the continent, Equatorial Guinea will serve as the 2019 host for the 5th Gas Exporting Countries Forum (GECF) Summit of Heads of State and Government and seminar. Equatorial Guinea has made significant steps toward its goal of becoming a regional energy hub, with advancements including the launch of the 2019 oil, gas and mining licensing round offering up 24 offshore and two onshore blocks; the signing of definitive agreements for the monetization of gas from the Equatorial Guinea’s Alen unit in the Gas Megahub project; and – in a first for the region – the inauguration of a liquefied natural gas storage and regasification plant in the mainland region of Equatorial Guinea as part of the LNG2Africa project.

The continent has become the world’s fastest growing region for foreign-direct investment, especially in the gas sector. In Africa, the number of total gas reserves has increased by one percent to 503.3 trillion cubic feet. At the same time, the demand for gas in Africa is also steadily increasing as the continent’s consumption of gas is also expected to increase by 3.1 percent per year. Nigeria, Egypt, Algeria and Libya have been leading the way in gas exports and new developments.  Substantial discoveries have also been taking place in Senegal, Equatorial Guinea and South Africa.

There has been a growth in intra-African collaboration in the development of the gas industry. In 2017, Uganda and Equatorial Guinea signed a Memorandum of Understanding (MoU) for cooperation in oil and gas development. In terms of the MoU, Equatorial Guinea will provide guidance to Uganda, assist it in achieving its oil and gas production targets and advise it on the signing of petroleum agreements. In an attempt to transform its oil and gas sector, Uganda is developing its infrastructure in key sectors as a means to drive investment into the country.

Speaking about Equatorial Guinea’s interest in supporting the development of Uganda’s oil and gas industry, Minister Gabriel M. Obiang Lima encouraged the country to continue with its oil and gas plans which are “the best one can find anywhere in the world,” he said. He further stated that, should the East African country continue with its plans, Equatorial Guinea may learn from it in the years to come.

Angola is also becoming an attractive gas investment opportunity. President João Lourenço issued a presidential decree which included specific policies to attract new investment into the natural gas sector. This includes a five percent tax on gas production, compared to ten percent for oil as well as a 15 percent income tax rate for non-associated. These attractive incentives, combined with a reformed licensing process and a renewed focus on reducing corruption, have put Angolan gas on the map.

There is currently only one operational gas facility in the country, located in Soyo. The Angola Liquefied Natural Gas (LNG) plant is a 12 billion dollar joint venture between Sonangol, Chevron, BP, Eni and Total. It has the capacity to produce 5.2 million tons of LNG per annum. With proven natural gas reserves of 383 billion cubic meters, there is massive growth potential in this sector.

As part of the 5th GECF Summit of Heads of State and Governments, the GECF will present the 2nd International Gas Seminar on November 27, 2019, in Malabo at the Sipopo International Conferences Hall. The seminar includes sessions and presentations from public and private sector gas sector leaders from across the spectrum of natural gas operations, and from across the globe.