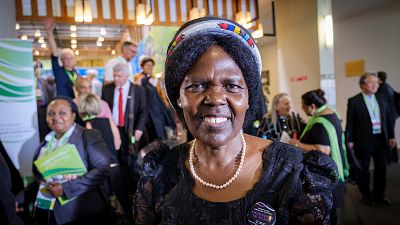 This is the first in a series of interviews with Thursdays in Black ambassadors who are playing a vital role in increasing the impact of our collective call for a world without rape and violence. By standing together from many sectors and many countries, Thursdays in Black ambassadors are conveying a sense of solidarity against violence and injustice.

Dr Agnes Abuom is moderator of the World Council of Churches (WCC) Central Committee. From Kenya, Abuom is a laywoman in the Anglican Church of Kenya.

Q: Why do you feel there is a need to engage in the Thursdays in Black campaign?

Dr Abuom: The Thursdays in Black campaign is an ecumenical campaign that invites men and women, really all people of good will, to join in saying “no” and to stop the menace and the pandemic of sexual and gender-based violence. Many women, during the late 1990s and early 2000s, were confronted with the rise of sexual and gender-based violence, particularly in conflict and post-conflict societies as well as in normal communities. The reason why I engage and champion the movement against sexual and gender-based violence is because it’s not just in conflict and post-conflict contexts, but it is a living reality in our churches, in our homes, in the public square, and we have seen it grow like a cancer spreading all over the world. There is not a single country, nor single nation nor church that cannot testify to the impact of this menace.

Q: What concerns you the most?

Dr Abuom: One concern I have is the fact that sexual and gender-based violence seems to be in the process of being normalized: the abnormal being normalized, particularly in conflict  situations, and in places where women’s rights have not gained momentum. And this normalization of violence against women is gaining momentum, yet very little government legislation is taking root.

Another concern I have is that churches themselves have not come to terms with the impact of sexual and gender-based violence. What is the impact? It is a long-term trauma, trauma that is becoming cyclical. And we know that it takes years for people to heal from trauma So we are dealing with societies that are traumatized, societies whose whole terms of life have been compromised.

Q: How does our faith factor into this context?

Q: What is your message to others? What would you like to see them do?

The other avenue is talk to individuals who are engaged in the movement. We also have badges that we share. We have study materials and Bible studies.

My vision – and the vision of Thursdays in Black – is we will have no more black to wear because there will be no more sexual and gender-based violence. Because the church will have stood firm with the vulnerable, with the survivors, and it will have said ‘enough is enough.’ Because of our faith, the churches have been able to educate men on positive masculinities. Men and women will become sensitive and actually be able to appreciate the dignity of each other, whether boys and girls or men and women.