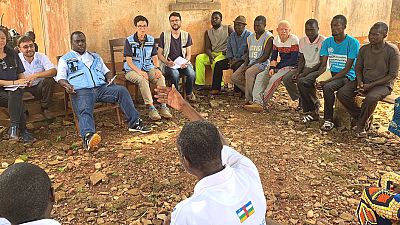 “I have witnessed the level of suffering among people affected by this complex emergency”, said Ursula Mueller in Bangui, after a week-long mission to the CAR.

“The humanitarian situation in this country continues to deteriorate”, she continued, noting that “most displaced people have been forced to flee multiple times” and are unable to return home due to continued insecurity and lack of essential services.

The number of people in need of humanitarian assistance and protection in CAR has jumped from 2.5 million to nearly three million.

Moreover, two-thirds of the population depends on aid to survive; more than 70 per cent has no access to safe drinking water; and some 1.8 million people are food insecure.

During her mission, Ms. Mueller visited Bria in eastern CAR as well as Alindao and Bangassou in the south-east, where she noted in some areas, increased freedom of movement and humanitarian access, creating new hope for civilians.

“People I met called for more access to essential services such as water, health and education”, she recounted. “At this critical time, development actors need to increase their programming, while humanitarians will have to continue to provide lifesaving assistance”.

On average, a gender-based violence (GBV) incident is reported in the country every 60 minutes, with 92 per cent of the victims being women and girls.

The deputy relief chief heard from dozens of crisis-affected women, whose GBV testimonies both appalled and shook her.

“They urgently need protection, and survivors need access to medical and psychosocial support,” she stressed.

Ms. Mueller also met humanitarian actors who are providing life-saving assistance to over 750,000 people every month, even though CAR is one of the most dangerous countries in the world for humanitarians to operate in. So far this year, three humanitarian workers have been killed and 26 have been injured.

During her visit, the Deputy Emergency Relief Coordinator underscored the critical importance of protecting civilians, appealing “to all parties to abide by their obligations under International Humanitarian Law and to cease all acts of violence against civilians and humanitarian personnel and assets”.

“This is a message I delivered throughout my mission, including in meetings with representatives of armed groups,” she said, flagging that “victims and survivors, including of sexual violence, must receive justice – and impunity must end for this society to heal.”

While the conflict continues, humanitarian assistance remains a lifeline for many affected communities.

Ms. Mueller thanked donors for their generous contributions thus far, but maintained the “much more needs to be done”.

“Existing donors need to scale up funding for the humanitarian response, and we need additional donors to support these efforts”, she urged.

“Without additional funding, humanitarians will not be able to sustain and scale up the ongoing response,” concluded the Deputy Emergency Relief Coordinator. “The people of this country need our help now and we cannot fail them.”