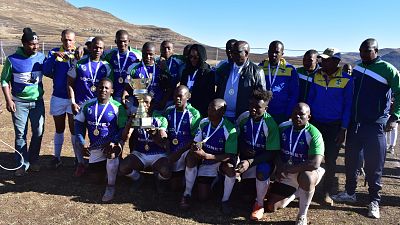 The tournament was held in the Tabaseka District of the Kingdom of Lesotho. The host union, Lesotho emerged winners after winning all the matches following around robin league competition.

Lesotho were in a fine form. They displayed good rugby and teamwork which propelled them to glory over the two days tournament. They received a huge motivation from passionate home fans who supported them all the way.

“We are happy to be given the opportunity to host this tournament and we thank Rugby Afrique for the efforts they are making to grow rugby in the region”, said the Vice-President of Lesotho Rugby Union.

Mozambique, who were participating for the first time in a Rugby Afrique organised tournament emerged second. The Mozambique team was accompanied by their Union President , Mr Luis Reves who expressed his gratitude to Rugby Africa for inviting the to the tournament. “We are optimistic that our participation in this tournament will boost our efforts to build and grow the game in Mozambique, and we look forward to the further collaboration with Rugby Afrique in future”, said President Luis.

Eswatini Rugby Union were ranked third. “We believe that was a great learning for us so we shall go back and put into practice all that we have experienced here in order to become better “ pointed out Mr Bandile, the head of delegation.

The Minister of Sports in Lesotho graced the tournament where she reiterated the government’s commitment to grow and spread the game across the country and within the SADC region.

About Rugby Africa:
Created in 1986, Rugby Africa (http://www.RugbyAfrique.com/), previously the African Confederation of Rugby (Confédération Africaine de Rugby – CAR), is one of the six regional associations composing World Rugby (www.WorldRugby.org), the international organisation responsible for the governing of Rugby Union and Rugby Sevens. Rugby Africa unites all of the African countries which play rugby union, rugby sevens, and women’s rugby. Rugby Africa organises the qualifying competition for the Rugby World Cup, and Africa 7, a qualifying competition for the Olympic Games. Rugby Africa has 39 members, including 22 membres and associated members of World Rugby, 10 members and associated members of Rugby Africa and 16 new countries collaborating with Rugby Africa.