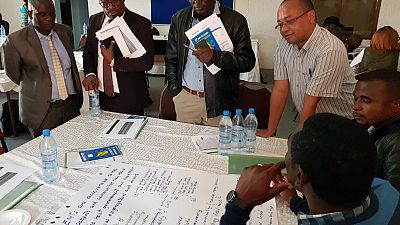 Zambia is in the process of joining other countries in the world by establishing the Emergency Medical Teams Initiative (EMT), a global programme which was created by the World Health Organization to enhance preparedness and promote the rapid deployment and efficient coordination of Emergency medical teams during disasters, outbreaks and other emergencies with a bearing on human health. To introduce the Emergency Medical Teams Initiative in the country, WHO headquarters EMT Secretariat, WHO Regional Office for Africa and WHO Country Office in Zambia provided financial and technical support to the Ministry of Health through the Zambia National Public Health Institute to conduct an EMT Awareness and Capacity Building Workshop in Kabwe from 26 to 28 August 2019.

The workshop which brought together participants from the Ministry of Health, the Disaster Management and Mitigation Unit, Lusaka province, select Hospitals, Ministry of Agriculture, Zambia police, the military and Zambia Red Cross was aimed at creating understanding about EMTs role in supporting the country’s national health system during disasters, outbreaks and other health emergencies and the steps and activities necessary to build national EMTs. It also helped participants to understand the basic coordination methodology for mobilizing national EMT and receiving international EMTs and integrating them in the response to outbreaks and other health emergencies in the country. One of the outputs of the workshop was an action plan for the development of Zambia’s EMT.

Using the examples of recent outbreaks and floods in the region, Dr. Ann Fortin from the WHO Regional Office for Africa, stated during her opening remarks that the EMTs played a pivotal role in emergency response, providing temporary surge capacity in support of local health response systems and of the communities. “EMTs must strive for self-sufficiency, a quality of direct clinical care that is appropriate for the context and demonstrate credentials that meet the requirements of national and/or international minimum technical standards” she said.

In his closing remarks, the health emergencies epidemiologist at the WHO country office, Dr. O-Tipo Shikanga said that countries that were better prepared managed outbreaks, emergencies and disasters more effectively. He emphasized the importance of having a functional EMT as a critical step to country preparedness and said that the WHO country office was ready to support the establishment of the EMT initiative in Zambia.

The Director at the Zambia National Public Health Institute, Dr. Victor Mukonka said that the EMT Initiative was an important addition to the ongoing efforts targeted at enhancing health security in the country. He said this was so because the country was not only at a high risk of importing the Ebola Virus Disease from the Democratic Republic of Congo, but was also experiencing other disease outbreaks such as cholera and faced risks of other health emergencies. He said that as a host country to the Africa Centres for Disease Prevention and Control (Africa-CDC), Zambia needed to build capacity for epidemic preparedness and response in order to properly coordinate action in the country and with other countries. Dr. Mukonka thanked the World Health Organization for its continued support towards efforts aimed at enhancing health security in the country.

Key recommendations at the workshop included development of country Standard Operating Procedures for formulation of EMTs; assignment of an international mentor for EMTs by WHO to the ZNPHI; development of criteria for identifying and prioritizing facilities/provinces that need to be trained in EMT; training of clinicians at points of entry; strengthening of the early warning system and surveillance. It was also agreed that the ZNPHI should produce a roadmap for development of the EMT initiative, logistical requirements for EMTs should be given consideration while ensuring self-sufficiency during the formulation of the EMTs and that hospitals should be targeted during the EMTs training.