Ventures Africa discusses Internet shutdowns and the future of democracy in Africa in its newly launched ‘Speak!’ Series 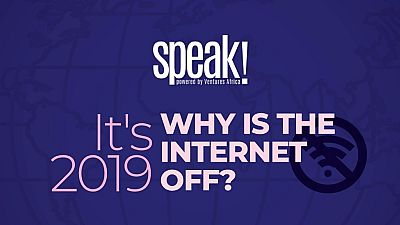 Ventures Africa (http://VenturesAfrica.com/), an online news platform and community that produces stories about an evolving Africa, has released its newest special issue, Speak! by Ventures Africa. VA Speak offers a unique angle around the key issues in policy, business, innovation, and life through the lens of our team. The inaugural edition is focused around Internet shutdowns and why this shouldn’t exist in 2019 or beyond (http://bit.ly/2jWMfGm).

Some of the core areas that are discussed explore how this increasing trend is dangerous for Africa’s democratic future, what internet shutdowns cost the continent, and those who are most affected. There are also four infographics which explain the evolution of shutdowns, what happens when its ‘dark,’ and lastly, the duration and economic cost of disconnection from the Internet.

“So for us there is a direct correlation between shutting down the Internet and human rights violations that are happening on the ground,” she further explained.

Ventures Africa also spoke with James Griffiths, author of The Great Firewall of China about how China’s brand of Internet censorship is influencing Internet shutdowns in Africa, and what this influence will mean for the future of democratic institutions on the continent.

In the last 5 years alone, a total of 21 countries have been disconnected from the Internet. An accompanying video sheds more light on just how much Africans are losing and why this needs to stop.

Distributed by APO Group on behalf of Ventures Africa.

About Ventures Africa:
Through award-winning journalism, new school video content, and active community engagement, Ventures Africa (http://VenturesAfrica.com/) stands as one of the most viewed sources of news in West Africa. Beyond commanding an organic audience, its team has worked to weave the company’s story into that of its community. As an online hub for discussion, education, and collective action, the platform provides an energetic and interactive experience for its readers, contributors, and partners.

Since 2015, Ventures Africa has published an annual list of innovators who tell us where the continent is going. Its Digital Issues feature unique perspectives on important issues. Previous issues have taken a unique angle on innovation in Africa, the recession, and political cultures of shame.

In March this year, Ventures Africa (http://VenturesAfrica.com/) launched a business series, Ventures Africa BizHive with an inaugural edition titled The Future of Nigeria’s Tech through the eyes of 10 Leading women.