In Ethiopia, reintegration support eases the return of displaced families

Since April 2019, conflict resolution moves led by the government have restored relative peace in parts of Ethiopia that have suffered unrest and enabled some internally displaced persons (IDPs) to return to their place of origin.

Nonetheless, fulfilling basic needs remains a major challenge. This summer IOM has stepped up the distribution of non-food items (NFIs) to thousands of returnees in the Southern Nations, Nationalities and Peoples (SNNP) and Oromia regions following conflict in Gedeo/Guji areas of Ethiopia that displaced 700,000 persons during 2018.

As of August 2018, IOM has been providing shelter assistance to the displaced communities through the construction of 39 communal shelters and the rehabilitation of 13 existing structures in district (or ‘kebele’) compounds used as temporary settlements.

In addition, NFIs as well as Water, Sanitation and Hygiene (WASH) support have been provided to 2,920 households. Last week NFIs were distributed to 500 households in Gedeo and West Guji Zones, Dimba Dimbe, Haro Bareti and Bankidabatu Kebeles while provision of shelter-construction materials to the displaced communities continues.

“When the conflict erupted, we did not have the time to carry our belongings. We just ran for our lives. When we came back home three months ago, it was devastating to see that our house was burned down to the ground, crops rundown, and everything else destroyed or looted,” 28-year-old Aster Dukele says as she recalls the incident which left her family homeless.

With return and reintegration efforts ongoing, this mother of eight is picking up the pieces. She and her family have started growing their enset (false banana) crop, which sustains their meagre livelihood. Without much money at hand, it has been very difficult for her to make the house a home again. But she’s trying.

As IOM increases its support to the Gedeo and Guji Zones, the provision of NFIs is proving very vital for the reintegration of returnee families. “These families had no means to supply themselves with the necessary kits and the lack of these basic kits has made return very difficult,” explains John Bang, an IOM staffer in charge of Shelter and NFI distribution.

In 2019 alone IOM in Ethiopia has provided 58,364 NFI kits accompanied by solar lanterns and cooking stoves, shelter repair kits for 4,674 households, along with Housing, Land and Property assistance, with 36,396 households benefitting from WASH support.

“We didn’t have pots to cook our food, materials to wash clothes, containers to fetch water, or properly walled housing,” says Abebech Deiko, a widowed mother of seven, who describes the hardships she and other neighbours faced upon their return.

Many returnees like Aster and Abebech need support to reintegrate themselves. Therefore, humanitarian partners continue to evaluate the conditions in locations of return as well as to verify the status of the returnees reported by the government.

“Through financial support received from the Federal Government of Germany, European Union Civil Protection and Humanitarian Aid and the US Office of Foreign Disaster Assistance, IOM is providing shelter construction materials, NFIs, as well as WASH support. However, there is still a major funding gap to address the needs of all the vulnerable returnees,” says Ester Ruiz de Azua, IOM Ethiopia Emergency Response Coordinator.

The Organization will continue the support in different districts in West Guji Zone over the coming months. 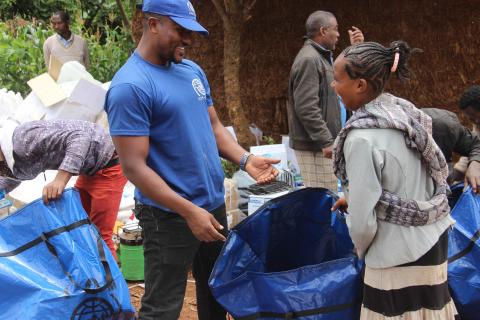