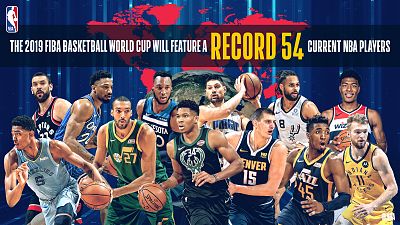 A record 54 current NBA (https://in.NBA.com) players will be featured on national team rosters at the 2019 FIBA Basketball World Cup in China, up from 45 in 2014.

The tournament, which tipped off Saturday, Aug. 31, will feature a record 103 combined current NBA players, NBA draftees, and players with NBA experience, up from 92 in 2014.

There are more than 50 former Basketball Without Borders (BWB) campers on national team rosters, including 11 current NBA players.  BWB is the NBA and FIBA’s global basketball development and community outreach program that has been conducted annually since 2001 and has seen 69 former campers drafted into the NBA or signed as free agents.

The following is a complete list of current NBA players on 2019 FIBA Basketball World Cup rosters*:

**NBA player on a two-way contract

The following is a complete list of NBA draftees whose rights are currently held by NBA teams on 2019 FIBA Basketball World Cup rosters*:

The following is a complete list of players on 2019 FIBA Basketball World Cup rosters who previously played in the NBA*: