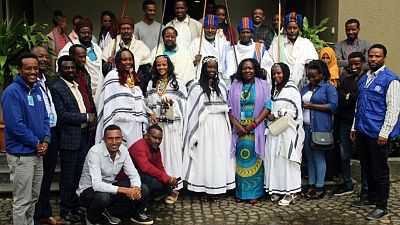 Aba Gedas are highly respected “cultural leaders” in the Oromia region and Gedeo Zone in Ethiopia. IOM brought them together with officials from the country’s Gedeo and West Guji Zones for a discussion on statutory peace building. The talks focused on how future conflicts could be prevented and improving social cohesion in Gedeo-West Guji and familiarizing community actors with components of statutory peacebuilding.

Following a 2018 spate of inter-communal violence, some 800,000 people have been displaced in Ethiopia in Gedeo-West Guji Zones. After the situation improved, and some peace was restored, both were due to cultural reconciliation led by the Aba Gedas. Many of the displaced returned to their hometowns.

However, despite the peace and reconciliation process, concerns remain over how to prevent such displacement from recurring.

IOM’s peacebuilding meeting took place on 24 August in Shashemene, Ethiopia, funded by the UN Peacebuilding Fund (PBF). The event may be considered historic as it brought together both sides, with six Aba Gedas (three from each zone) alongside four Hadha Siqes (respected peacemaker mothers) who sat at one table to discuss ways to strengthen the peace initiatives that began five months ago.

“This workshop is a platform that has brought children of the same father under one tree for discussion,” said Denbobe Mare, the head of Aba Gedas from Gedeo Zone, speaking on the timeliness and significance of the meeting. “Such initiatives could help us to iron out challenges which could prevent our peacebuilding efforts,” Mare added.

Challenges discussed were highlighted by the Aba Gedas from both sides, while emphasizing the need for integrated efforts from both Aba Gedas and the Zonal Attorney Offices. The Aba Gedas confirmed that they are willing to counsel one another on mutual issues, and co-chair meetings when conflicts arise.

“What we agreed here together should be followed through by the Aba Gedas when our eight years of leadership are over, and we are replaced by our successors,” said one of the Aba Gedas, affirming their continuous commitment to this, even after their terms end.

The Government of Ethiopia requested IOM’s participation through the Ministry of Peace to support peacebuilding initiatives. IOM organized these talks through a project known as Inclusive Governance and Conflict Management Support to Ethiopia. Traditional conflict resolution involving respected community figures is one approach the organization is actively supporting within the two Zones.

IOM continues to support affected populations in both areas with humanitarian assistance. Such assistance includes the construction of transitional shelters, the distribution of reintegration kits, improving water and sanitation facilities, alongside the provision of health services.